A few years ago, I road tripped around Croatia from Zagreb down to Dubrovnik, stopping at Plitvice National Park. It was out of season, incredibly empty and felt like our own personal paradise; walking along the boardwalks and bending down to admire all the little fish. The only thing that was missing in this, was the option to swim in the lakes – something they don’t allow at Plitvice.

A few years later, I learned that swimming is actually an option at Krka and had wanted to visit ever since. Then, as I pointed out in this earlier post, last year my boyfriend and I saw some cheap flights to Split, so everything sort of fell into place. It was only a long weekend, so we didn’t have a lot of time to travel around but did manage to go to Hvar Island and of course, Krka National Park; another stunning park with miraculous water falls and Jurassic Park like scenery.

We didn’t particularly plan our trip and so our decision to go to Krka was made on a whim, the night before. Looking back, I wish I had planned it as I won’t lie – getting there was a bit of a nightmare.

If you are planning on going via an organised day trip or driving, then skip this section, as it goes into some detail about public transport/buses which won’t apply to you.

We knew we didn’t want to go on a planned day trip because they’re quite expensive in comparison to public transport but my goodness, I wish I had known ahead of time how the buses etc worked because figuring it all out was a bit painful. I might have just agreed to pay a bit more to avoid the headache of finding our own way.

I’m not saying it’s impossible, as it isn’t – all it takes, is a little bit of thinking ahead. In short, my advice would be to book online via Croatia Bus (Link here) or FlixBus (Link here).

The night before we were due to go, we looked at public bus times and saw there was one first thing in the morning, so headed down to the bus station an hour before that one was due to leave to buy a ticket – sadly, it was completely sold out. I had seen there was an option to purchase tickets online via Croatia Bus (a separate company) the day before, but neglected to think about the fact that they might sell out, so when I went to buy them later on in the day they were unavailable (hence why we ended up at the bus station so early in the morning).

At this point, after being told the public bus tickets were sold out, we did consider abandoning the trip but as there were tickets available for the slightly later bus (an hour or so later) which would get us there just before lunchtime, we made the decision to go for it anyway. It was a bit frustrating that we got up so early for nothing, but it did mean we were up in an empty Split city and had a nice breakfast in what would usually be a busy square in the Old Town.

I’ll point out that there are quite a few options/companies that will take you to the park – I recommend either booking the day before, or booking online if you can because it’s so much easier than getting them in person on the day.

Even the return journey was a nightmare – they wouldn’t even allow us to book a return ticket in person; we were told to do that from Skradin and once there, all we found was a very small kiosk with someone selling return tickets for about 3 times the price we expected to pay and at quite odd times, but luckily I had a quick look online and found some cheap mobile tickets at around 5pm. This didn’t leave us a lot of time in the park but was better than nothing.

The bus itself goes from Split bus station (by the harbour) to Skradin, which takes about 1 hour 30 and cost around £8 if bought via Croatia Bus. Once there, you need to buy an entrance ticket to the park, which will give you access to the boats that take you into the park (July-August these are around £23/April-June & September-October these are around £13 which is what we paid).

There can be quite a long queue for this boat – we were there in September and it was still about 20-30 minutes so if there is a long queue, it makes sense to either hire a bike and cycle or just walk to the park (entrance fee is the same regardless). If you do opt for the boat, it’s a stunning journey and one I still remember vividly. 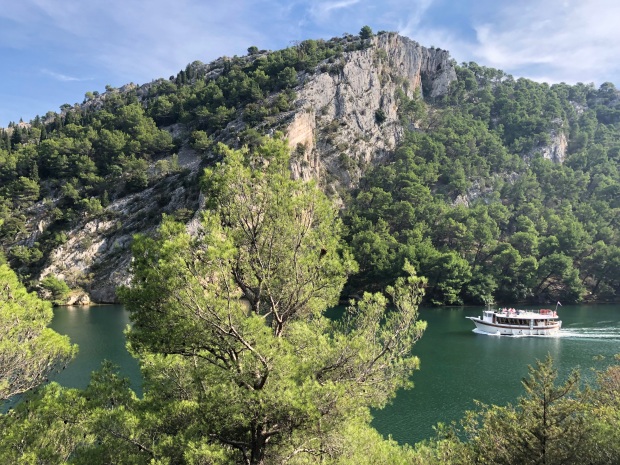 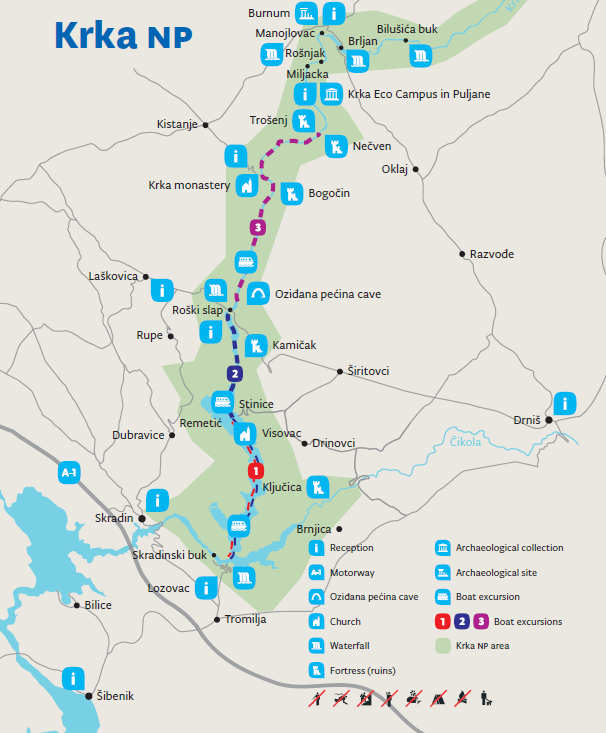 Annoyingly, as we did end up getting the later bus, it was already quite busy inside the park. Everyone tends to head to Skradinski buk where you can swim (it’s also the closest waterfall to where the boat takes you) – on the way you will pass some kiosks for food and drink, as well as toilets. There aren’t any of these right by the swimming area, so if you need to go I recommend stopping there!

Once at the swimming area, get into your swimming stuff, find a space to put your stuff down (everyone just kinds of leaves their things everywhere, so there is a risk of things being stolen) and then jump in!

Two things I would definitely recommend at this point would be to wear your costumes/swim shorts underneath your clothes so you don’t have to get changed – I’m so glad we did as there aren’t many private places (aside from the toilets)!

Also, swimming shoes with some grip on the bottom – Fred had bought us both some before the trip as we were aware some of the beaches in Croatia are quite rocky and they were a bit of a god send – the area around the waterfall is quite muddy and slippery with a lot of trees and debris, which can make getting in a bit stressful. It’s quite entertaining to watch other people attempting to get in when it isn’t you though, I won’t lie…

Processed with VSCO with p5 preset 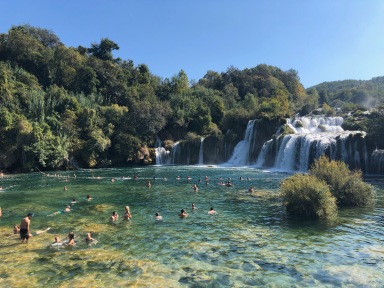 As it was September the water itself wasn’t as hot as I imagine it would be in July, however once you get over the initial chill it’s honestly quite nice! We were lucky with sunshine and so the water warmed up fairly well (especially with all the people in it). We probably spent about 20/30 minutes in there before the amount of people got overwhelming.

Crowding aside, it was an unforgettable experience and one I would like to repeat. I would absolutely love to get there first thing one day and experience it in all it’s glory. 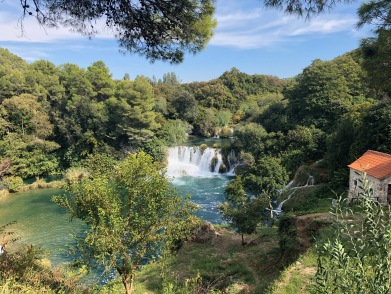 After this, we went for a general walk around the trails before stopping for lunch. At this point, we realised how much the day had got away from us and it was already 90 minutes before the coach was due to leave; we had seen the queue for the return boat on the way in and knew we needed to get going if we were to have any chance of getting that coach.

As we predicted, the queue for the boat was way too long, so we walked back to Skradin. Aside from the swimming and the boat trip itself, this was actually my favourite part of the day – the trail was shaded, the views were amazing and for once, there weren’t a million other people around.

Now, apologies for my slight ramble in terms of the day itself but I won’t lie, it wasn’t quite the day I expected. Of course, I still look back on it with fond memories and I’m glad I went but I wish I had known what I know now.

If you have the time, I would actually recommend staying by the park – there’s so much we didn’t get to explore there and the area itself is lovely. I doubt it would be somewhere to stay for more than a night or so but still, it would make for a much more relaxed visit to the park.

2 thoughts on “A Day Trip to Krka National Park, Croatia”