Brussels isn’t somewhere I had ever hugely considered, I didn’t know that much about it and to this day, I’m not quite sure how we ended up deciding to go there. Nonetheless, I’m glad that we did. It’s not a huge city centre – small but perfectly formed, with a lot of history, great biscuits and even better beers. Just right for a quick weekend away.

For us, 48 hours was the perfect amount of time there. You can definitely spend longer of course but we felt like we managed to explore everything we wanted to see within that time, without feeling rushed.

We got the Eurostar from Kings Cross first thing in the morning, which worked out really well – it only takes 2 hours (shorter than a lot of journeys around the UK!) and so we were in Brussels by mid morning. Our hotel (the Sandton Hotel Centre) was a 30 minute walk from the Eurostar station and very central, which made everything so easy.

I love getting the Eurostar, in fact, I would choose to get it over flying any day. Of course, living in London does help with that but in general, I find the ease of going through security for the train (with as large a liquid as you want – they even let us put an entire cup of tea through there in a little holder) and the speed of everything so much simpler than an airport. No running to far away terminals or fighting to get your bag in the overhead lockers. Plus, there are lovely views most of the way and if you book in advance, you can generally get a good deal price wise.

We got the train there and back – leaving on Saturday morning and coming back Monday morning. In fact, I was actually early for work because of train times, which is pretty amazing considering I came from a completely different country.

Below is what we did across 2 days, of course you are welcome to do them in any order you like – nothing on this list is too far from each other, in fact we pretty much walked everywhere, this is just how we happened to do it. There was no particular rhyme or reason for the way we went about these things; we are big fans of ‘starring’ places on Google Maps and then using that to plan our trip based on where we are and what we’re feeling. None of the below needed to be booked, so we just picked things to do based on where we were and what we were feeling. 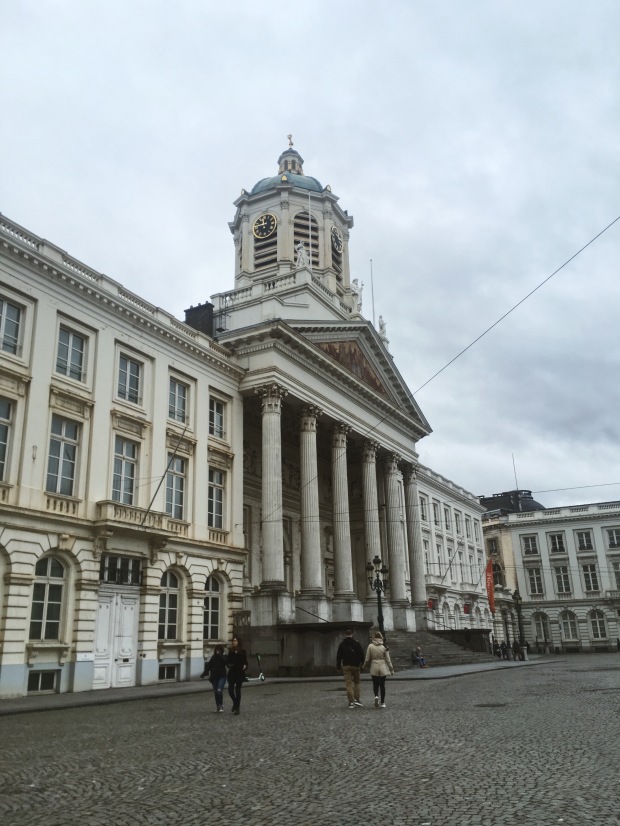 A public square which contains some beautiful buildings, including a few museums. We chose to go to the Royal Museum of Fine Arts of Belgium, which was a lovely place to wander round for a few hours. It’s also, massive. We didn’t really realise this when we first got there – I think there must have been some building work going on because to get anywhere, we had to walk the most long winded ways. Somehow we ended up in the basement which housed some pieces that I genuinely still don’t know if they were meant to be art pieces or not, including a man doing some kind of science experiment similar to what looked like the process of making beer. Whether or not it was part of the exhibit, we watched for at least 20 minutes, fascinated by what the hell he was going to do next.

On top of that, we also got in a lift that had SEATS. Actual seats. The dream (for the 10 seconds we were actually in the lift). (Yes I was so blown away by this I took photos). 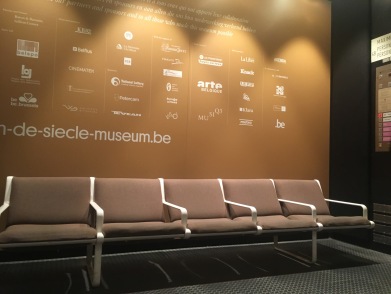 Of course, this probably isn’t what most people take away from this gallery – it contains over 20,000 art pieces, including Rubens and Jordaens.

TOP TIP: You can get a discounted ticket if you do travel by Eurostar. We didn’t know this when we went in but the woman at the front desk recognised our English accents and happened to ask how we got there. When we told her it was by Eurostar, she offered us the discounted tickets, which was super nice of her considering we didn’t even know the discount was a thing.

A beautiful building, also known as ‘The Old England Building’. Once a department store, it is now a musical instrument museum with an incredible facade. We didn’t actually go inside the building, instead we chose to be two of the many tourists gawping at the architecture and taking pictures. From what I’ve heard though, the museum is well worth a visit.

Sadly we visited on a bit of a rainy, dreary weekend so the park and palace weren’t as grand as we had hoped but from other pictures I have seen of both places, on a good day they’re a good place to spend some time. Unfortunately I’ll admit we only spent around 15 minutes there, as it isn’t that fun to sit in a rainy park.

For all intents and purposes, the picture below is how I imagined my visit would look:

A post shared by Veronica Hidding (@thecloudsarelowerhere) on Nov 6, 2019 at 2:39am PST

Perhaps to anyone from The Netherlands/Belgium, this is a very odd thing to put on an itinerary but honestly, as a Scandi themed homeware obsessive, I had a blast here. It’s a homeware shop with a mix of Hema, Habitat and Zara Home vibes which is really well priced with a good atmosphere. If you can’t make it there, you can get stuff delivered around Europe/the World (at 10 euros a pop for the UK, I believe) but we decided to just pick a few bits up that we liked including a big vintage style milk bottle for about £3 and an enamel vase for about the same price, which would be about triple in London. Another one of the beauties of travelling by Eurostar, as we actually had the space! 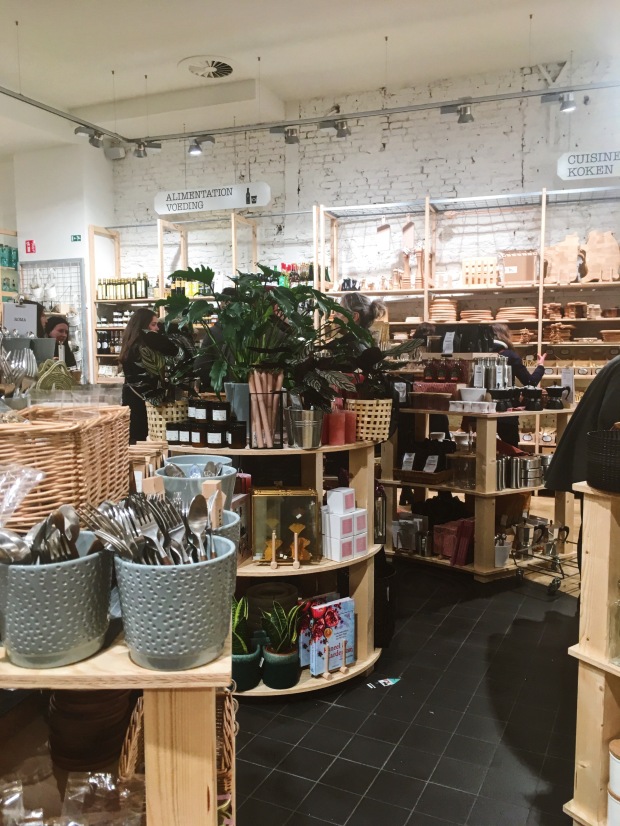 We stumbled across this place by accident and I’m so glad we did. With cool music, good beers and an incredible glass ceiling, the vibes of this bar are off the charts. If I lived in Brussels, I would definitely make it my local haunt. Nonetheless, I’m pleased to say I was able to have at least one drink there.

I’m slightly ashamed to say that we actually liked this place so much that we visited not just once, but twice during our trip. It’s not usually something I would do but it’s genuinely that good; a great fish and chip restaurant with a focus on the lesser known fish and sustainability. It’s slightly pricier than your average fish and chips but it’s well worth it.

In this way, you can imagine my surprise when I found out there’s another restaurant by the same owners in London (Camden – it’s called Hook). Funnily enough, I also went to that one when I got back and can confirm, it’s also brilliant.

I’m not sure you can go to Brussels without visiting here – it’s a bit of a mad pub in the centre of Brussels, which famously brews it’s own beers. It’s one of those crazy places which is absolutely massive but still incredibly hard to get a table (especially on a Saturday night). I would definitely make time to stop by, if only for one drink, to experience the madness for yourself.

It’s been a running theme of ours recently, that if we go somewhere that has any kind of train themed experience, we have to stop by. It started out as a joke, as we have both always had a bit of a thing for trains and thought it would be a laugh to stop by the museums. Turns out, train museums are great and even if you don’t think you are that fussed about them, they’re good fun. Fred was always a much bigger fan of trains than me, but he won me round to how cool they are (very easily).

It’s slightly out of the way of the city centre (around an hour’s walk/20 minutes on the Metro), we walked there first thing on the Sunday morning and it was lovely to see different parts of the city; we walked past the botanical gardens and some amazing buildings. Plus, we saw a lot of locals getting up and enjoying their mornings; walking their dogs and grabbing pastries at their nearest bakery. I always like to imagine what my life would be like if I lived in a city I’m visiting and both of those things sound like the dream to me.

The train museum itself is massive, with anything from Eurostar to Steam Engines. Some of them you can only walk around and look at, but a lot you can get on board and sit on. There’s also a cafe and lots of things for kids to experience (not that we did those things but I was aware they existed as there were lots of kids there).

This is a beautiful square, with incredible buildings – it’s nice to wander round for a bit although 100% a massive tourist trap. We didn’t spend a lot of time here but it’s very impressive and worth stopping by.

I’m really not sure why this is so famous but it’s one of those things you can’t not to go while you’re there. It literally is just a statue of a pissing boy. Well, they also put costumes on him. Genuinely absolutely no clue why it’s such a big thing but the hoards of people surrounding the fountain alone is an incredibly fascinating sight to see.

A friend of mine from University is from Brussels, so we met up for a beer with him and he suggested this place. It’s a really cool, old bar that literally feels like a step back in time when you walk in. He ordered a cheese board, as apparently that’s the thing to do. So we spent a nice couple of hours reminiscing, eating cheese and drinking beers. I highly recommend it.

Not far from the bar, is an undercover shopping centre with some great coffee, biscuits and fancy shops for window shopping. It’s not like there are a million things to do in here but it’s pretty to look at, and a good way to stay out of the rain for a bit, if you’re as unlucky as we were with the weather.

On top of all of the above, we also wandered round a few other shops, and enjoyed having long coffees and beers without feeling like we “had” to be somewhere at every second. For such a short trip, I don’t think you can ask for much more than that.

One thought on “48 Hours in Brussels, Belgium”