A few weeks back (when it was still pretty damn chilly), I went with my boyfriend, Fred to visit his parents down in Devon. He grew up there and absolutely loves it, so I’d heard a lot about it. I’d been down to that area of the country before (to Cornwall) but never to his neck of the woods so I was excited.

We took the train down to Exeter from London Paddington which took about 2.5 hours; really not that bad a journey for a weekend (we booked this ahead of time and it really didn’t cost that much by the way).  We got there quite late on the Friday night so just chatted with his mum and then went to bed. I had a really bad cold this weekend too but soldiered on because I’m a great (and very modest) girlfriend.

The next morning we went to the family farm near Thorverton (don’t ask me to point to it on a map, this is what google is for). Ready and waiting were two very energetic farm dogs who were more than happy to join the three of us for a walk / walk near us and then maybe run off for a bit to go chase stuff, causing us all to have panic attacks because we thought we’d lost them. 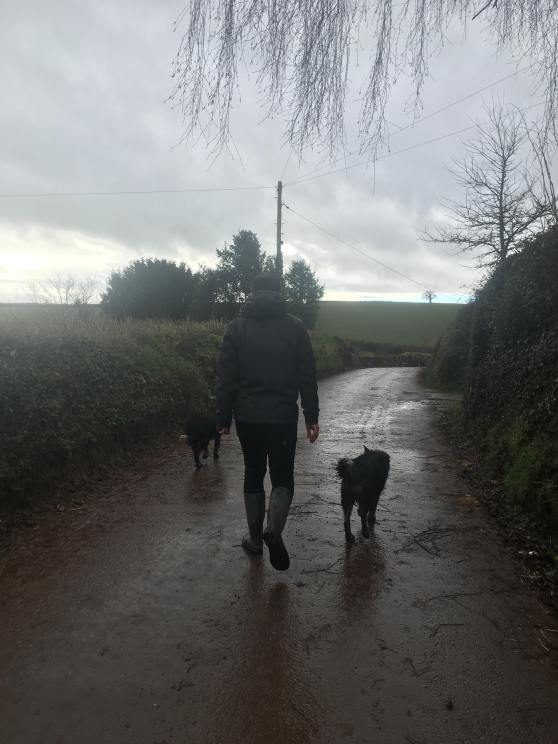 It was really nice seeing where he used to spend a lot of time growing up. We even popped in to see his granny in her cottage for a cup of tea! Its proper countryside down there and I have to say I was a bit jealous. London views are nice but in my opinion they’re easily beaten by fields.

We were absolutely covered in mud after the walk, so after this we went back to his mum’s house to change our jeans; I’d like to point out here that I was half covered in mud from the dogs and half covered from Fred tripping and getting mud all over me.

Once we were back from the farm, we walked into Exeter and had a wander round. Fred pointed out lots of nice landmarks to me including the cathedral, the Quay, a house that moved (it got literally moved in its entirety down the road) and of course, many lovely pubs, including the Old Firehouse (super charming, full of fairylights, good beer) and a very nice (and huge) Wetherspoons called The Imperial. I still can’t believe its a Wetherspoons to be honest, aside from the fact that I somehow spend less than a fiver on a round, which is a rarity.

I really liked Exeter – I didn’t really know what to expect before I went but the city itself is very pretty and houses the narrowest street in Britain. I actually didn’t believe him at first because it didn’t seem that narrow but google has since told me I’m wrong. Also I had no idea but Exeter was a big inspiration for Harry Potter – they say that Gandy Street was JK Rowling’s inspiration for Diagon Alley and I can really see why. I found all the Harry Potter stuff quite funny as well seeing as we went to Devon only a week apart from me going to Edinburgh, where there are tours dedicated to how it inspired Harry Potter because Rowling wrote it there. They also have a street that is supposedly inspiration for Diagon Alley (Victoria Street) but I think the one in Exeter is more convincing.

Also, Fred was describing all the things there were to do and I was in awe at how many more opportunities he had to do things than I did in my hometown. To this day when people come to visit the best things on offer are a sculpture trail and a chair museum (that I’ve actually never been to).

After a few beers, we got the train to Torquay, where Fred’s dad (and his lovely dog, Otis) live. It was dark by the time we got this train but Fred was very insistent that the line we were on was very pretty because it was almost in the sea. Supposedly if the waves are bad they go over the train.

Again, we arrived late, so we just had some dinner and drinks. Then the next morning we went for a walk in Scabbacombe Sands which was ridiculously pretty. This is a very sweeping statement but I’ve never been a particularly big fan of beaches – more recently I’ve realised its probably because I’ve not actually been to many nice beaches. We used to do cold holidays rather than hot as a kid and you don’t see many beaches up mountains.

Obviously it was quite (extremely) cold at this time of year but we didn’t swim (I preferred not freezing to death), instead we walked down to the beach, skimmed some stones and walked down the coastal path. It had been a bit rainy on the way there but we got lucky and the sun poked its head out for the time we were walking.

When it’s so pretty you consider going in, even though you know the water is absolutely freezing 🌞

Sittin (standing) on the dock of the bay (Marina)

Time was getting on by this point, so we caught the train back to Exeter, and I saw the famous very pretty train route – he wasn’t lying about it. Then we had time for one more drink in the fancy Wetherspoons before an evening train back to London.

Obviously I didn’t actually plan any of that, I just went along with Fred’s plan but its amazing how much you can get done in a weekend, including travel to and from London. Its quite a funny concept to get your head around but a big benefit to living in London is just how easy it is to escape it. Lots of people are very city centric and don’t like to leave it (I actually know someone who has never been to the countryside and only saw a pig for the first time aged 25), but it really does you good to get out of the big smoke and breath some fresh air. It does also help of course if you have someone to take you round and somewhere to stay on the other end, but even if you don’t have those things, I would still say its worth it.

One thought on “BEER AND BEACHES | DEVON | WEEKEND WANDERING”