A few months again, I wrote this post about a trip down to Devon with my boyfriend to visit his family. It was such a nice weekend, that we decided to use some holiday days to go down there again (this time joined by my dog, Bonnie).

It always feels a little bit funny writing about family trips because in themselves, they are very different to other breaks. Mostly I think, they’re a lot more intimate than other trips can ever be; although Fred (my boyfriend) is amazing at organising things to do and excitedly showing me the places he grew up visiting/exploring, I find its more about spending time together than anything. Hence why this post is going to be lacking in specifics and instead more of a gallery than the usual diary style review. (Stop scrolling now if you’re not a fan of dogs)

We drove down in my car from my parents in Buckinghamshire on bank holiday/the start of half term holiday. This, in itself was a mistake because it took way longer than it should of – I would say this is a tip but I assume most people already have the common sense that we didn’t… If you’re going in school holidays or bank holidays, on a weekend, drive down as early as you possibly can. Basically, don’t do what we did.

Our first few days were spent in Exeter where we mostly, in all honesty, made use of the local pub’s offerings (we drank beer). On the first day we got the train to Topsham where we walked around a bit, before I got conned into watching a football match that everyone but me was prepared for (long story short, I am not a big fan of football and Fred knows this so decided not to tell me the real reason we were going to a specific pub). To make up for this, I drank far too much and regretted it intensely the next day.

We still made it out and about though (Fred’s mum joined us and very kindly drove) – our first stop was Sidmouth where it was misty as all hell but still beautiful.

Then we headed to Beer, where the idea was to have a ‘beer in Beer’ – it really, really wasn’t something we wanted to do in our hungover state, nevertheless we are anything but quitters… So we had a half pint each. Still counts, right? #beerinbeer

If you read the post from the last time in Devon, you’ll know that I was ill whilst down there. I still can’t quite believe it but somehow I got ill AGAIN this time. I’m still questioning whether it is possible to be allergic to an entire county. Or if fresh, non pollution ridden London air, is just too much for me to handle. Both seem like the potential only options. Definitely couldn’t just be a cold. Or anything to do with the amount of beer.

Even though I was ill ( because I’m still an amazing and modest girlfriend), the next day we got in the car and drove to Torquay where over a few days we walked many, many miles. My dog and her little legs did extremely well. Fred and I’s also did their best.

We went to Haytor, in Dartmoor National Park, which was gorgeous – even Fred’s dog Otis and my dog, Bonnie, seemed to appreciate how pretty it was. It was crazy hot for May which we were super glad of considering the weather report initially had nothing but rain clouds pictured for the week. My only (small) snag with this, was that I got sunburnt on JUST my right arm and I still don’t understand how/why. Fred of course got a tan because he is a lucky human being and manages to get one after standing in the sun for 0.3 seconds any time of year. 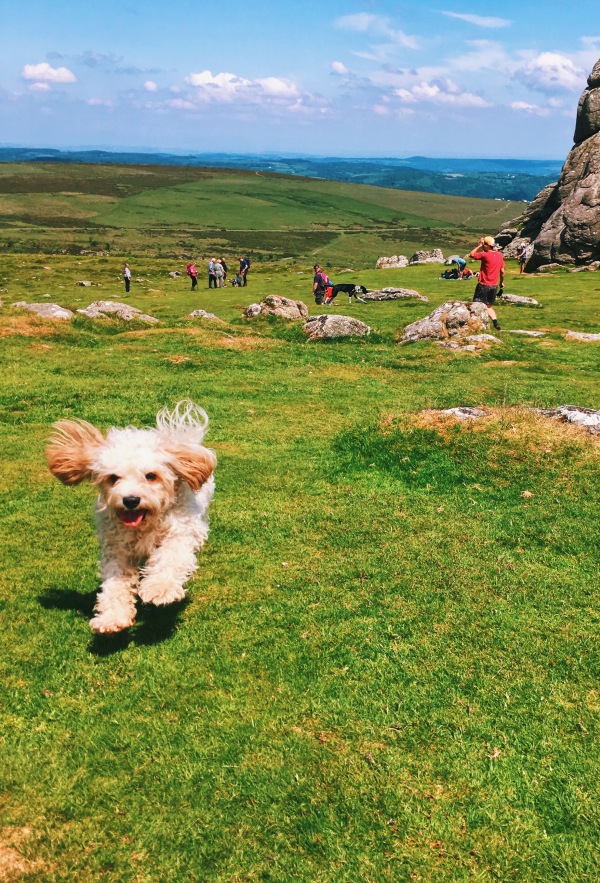 Despite the weird sun burn and Fred somehow losing Otis’ lead, it was a really nice day, ending in (you guessed it) a trip to a pub. A proper, sweet, countryside pub complete with goats and chickens.

The day after this, Fred surprised me with a day trip from Paignton to Dartmouth via steam train and ferry. It was superrrr cute. Especially since they gave us a physical printed dog ticket for Bonnie so she could join us. We carried the ticket though because she doesn’t have any pockets/doesn’t understand the concept of tickets.

She’d only ever been on a few trains and never a boat before but she was so chilled out, it made the day really easy and pleasant. There were loads of dogs on the train and some of them didn’t handle it quite so well.  We walked about an average of 5 miles every day we were down in Devon, so I’m not sure if she’s just super chill about boats or if she was too tired to kick up a fuss. Nonetheless, I was a proud dogmother.

In Dartmouth, we walked to the castle, down to the little cove and finally (of course) to the pub. 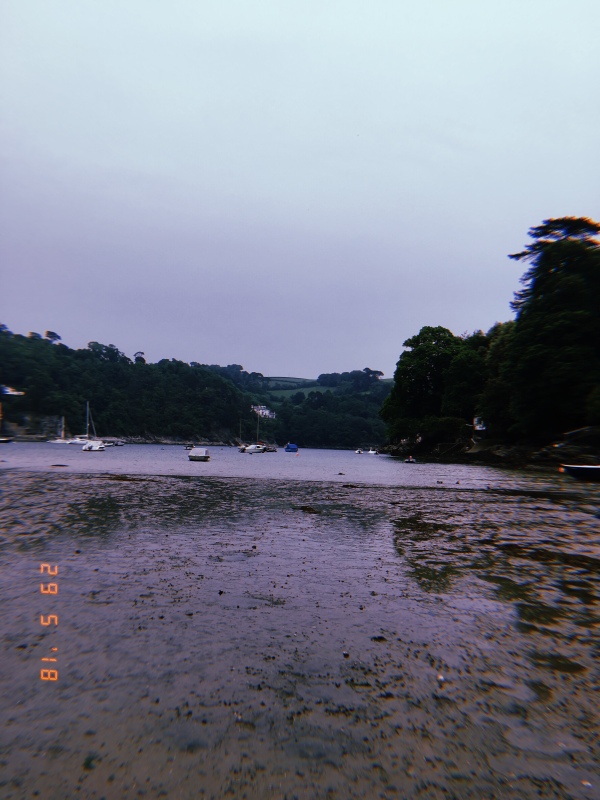 The next day was our final one before driving back and sadly by this point the rain caught up with us (we did pretty well avoiding it up until this point, so we weren’t too upset). It didn’t put us off doing things – we still walked down to the beach and then back up to Cockington where we got some beaut cream teas. Plus the owners absolutely spoiled Bonnie and Otis with many, many dog treats. 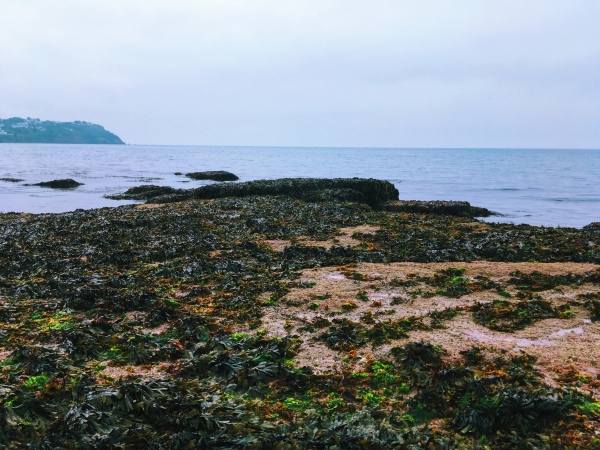 After this, we went to Teignmouth with Fred’s dad, to a beach where to get there you have to walk through a tunnel (which cuts through a cliff) out onto a cove, which was cool. Then (surprise surprise) we walked back through the tunnel and round to a pub.

It was sod’s law that I got ill seeing as I had staved off a cold for quite a while but it didn’t impact the trip too much for me. I still had a really nice time and my dog LOVED it (living inland means she doesn’t see many beaches!)

This may not have been a particularly helpful guide to Devon but please let it teach you one thing – don’t ever let a weather forecast put you off going somewhere. We could of and would have missed out on glorious sunshine if we had taken the forecasts as gospel.

One thought on “A FEW DEVON DAYS | WEEKEND WANDERING”