Lately I’ve realised how strange it is that I often see more of other countries than my own – on Hamilton and I’s road trip around Croatia, everyone marvelled at how many places we were going to explore; places they had never even been to even though they lived there. At the time, I thought they were exaggerating – of course they must have been to these cities, they live there! Obviously they weren’t lying, when you live somewhere its so easy to take it for granted.

So recently Nai (Oh Six Eleven) and I, jumped on a train for the short journey to Oxford. We grew up near the border of Oxfordshire so its shameful we don’t visit more often. In all honesty, the last time I went was when a Dutch friend of mine was staying with me!

Oxford is a great place to visit – it has beautiful buildings, great pubs and our favourite, plenty of free museums. Its winter so the weather there wasn’t fantastic but seeing as we were there to go indoors, we weren’t too fussed. Its much busier with tourists in the summer anyway.

We started the day how everyone should, with brunch. We read up online about where to go and The Handle Bar Cafe seemed like a favourite, so we gave it a go. Thankfully, it didn’t disappoint. We were seated quickly at a cute table near the window by a very friendly server, where we could enjoy the decor – its not called The Handle Bar for nothing. Oxford is a very bike friendly city; there’s a bike shop downstairs and bikes hanging from the walls in the cafe. As well as plants and other nice things. 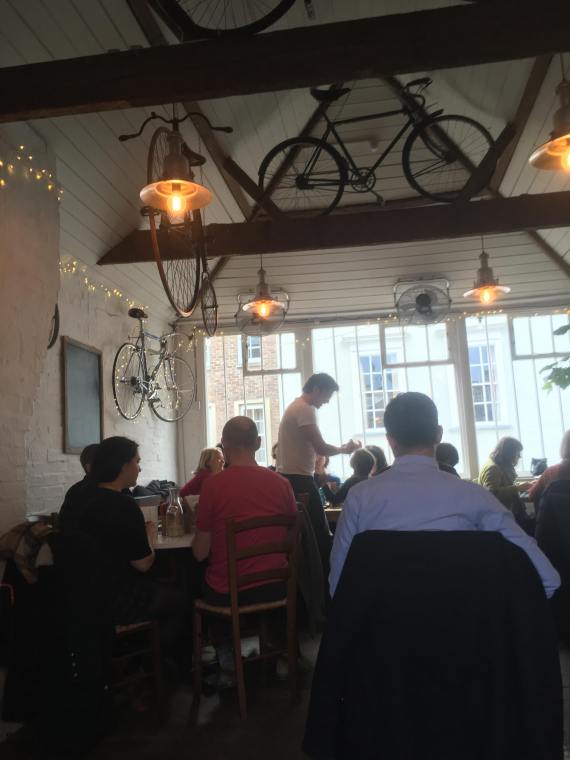 On top of the sweet interior, the food was pretty good too. I’m a big, big fan of chai tea lattes – the best two I’ve ever had have been abroad. One in a cafe in Paris, one in a cafe in Chicago, and sadly I can’t quite afford to nip to either of those places for a chai tea latte when I feel like it. The one I had a The Handle Bar Cafe blew me out the water. I’m so desperate to know how they make them taste so lovely. I have all the tea in the world at home (almost literally) and a milk frother but for some reason, making a good chai tea latte just isn’t within my skill set. If anyone knows of any classes on how to make a good one, sign me up. I also had coconut and banana pancakes which I would happily eat again and again.

Still thinking about the best chai latte I have ever had ⭐️

After a chilled brunch and a catch up, we went to our first museum – The Oxford University Museum of Natural History. It doesn’t seem that big at first but its on a few levels and actually has quite a lot to see. Plus, as soon as you walk in there are things you are allowed to touch. Great for actual kids and big kids (like us). As I mentioned in a previous post, I don’t love spending ages looking at dead animals, it creeps me out a bit so we moved on to our next museum, which is handily at the back of the one we were already in – The Pitt Rivers Museum. Its a fun museum because its comprised of a bit of everything. That’s probably not how the people that work there would want me to describe it but its true – there’s Hawaiian feathers, African pottery, masks from North America… A bit of almost everywhere on earth, in one room. Its quite a lot to get your head round! 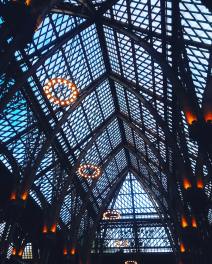 Our next and final museum of the day was the Ashmolean. Last time I went to Oxford it was shut for redevelopment so it was cool to see what they’d done. Its another huge place filled with all sorts – we were mostly interested in the art at this point in the day so headed straight to the top floor, where the modern art is tucked away.

In between walking to the museums we had a little wander around the city centre to see the Bodleian library and the radcliffe camera. The architecture is beautiful; yellow headington stone – students at Oxford are very lucky to be able to study in such gorgeous surroundings. Though it must get slightly annoying having tourists gawk in the windows all the time!

We only had one day there, so didn’t see everything these museums have to offer however I think we managed a fair amount all things considered. It gets quite tiring concentrating, so at this point we decided it was time for a well earned drink. We were initially intending on going to a board game cafe but it was full when we got there (it was raining so I think a lot of people had the same idea).

Oxford is full of nice pubs though so we went to one that we had seen when we were walking from the train station called George Street Social. It was quite studenty, with people working on their laptops, but busy so had a nice atmosphere. The menu was a bit random for the surroundings (way fancier than we had imagined), so we just had a beer and some wedges. It saved us some money, so we weren’t complaining!

It was dark by this point and not particularly warm, so we walked the short journey to the train station and went home. It makes you feel very lucky to be able to do something so cultured not that far away from you.

Last weekend we were intending on going up to Leeds but sadly the snow thwarted our plans! We definitely have more ideas afoot though and will hopefully make the journey up there some other time.