Most of our time in New York was spent in mid/uptown but this was our final day so we went AWOL (to other nice places). First stop, Brooklyn Bridge.

This day (funnily enough the one we were spending the majority of outside) was absolutely FREEZING but it didn’t put us off – we wrapped up warm and headed out, only to head back in (to the Subway). It was our first time riding it because generally we’re pretty bad at directions and had been too lazy to figure it out. BOY did I regret this once I got on it. Its so ridiculously simple and cheap (in comparison to London’s extortionate prices). We definitely should have used it the whole time. You buy a metro card from a person or a machine (which I still for some reason have in my purse now, a month later) top it up (like a London oyster card) and away you go. I had already downloaded a Subway map app on my phone; I have a tube map on my phone at all times in London even though I live here – its free, tells you the quickest route and updates you if there are any delays/works on the line. Whats not to like?

We got to Brooklyn Bridge first thing and it was gorgeous weather. Yes freezing cold but sunny as ever. It was nice being out of the touristy areas – it was Sunday morning and people were out jogging, cycling, walking their dogs. Being in a big city doesn’t always feel particularly homey but at this moment it really did. I could see myself running across Brooklyn Bridge on a Sunday morning (or maybe looking out of my tiny apartment window at other people doing that, while sipping a cup of tea). We meandered across it, took some photos, did some people watching and walked back. 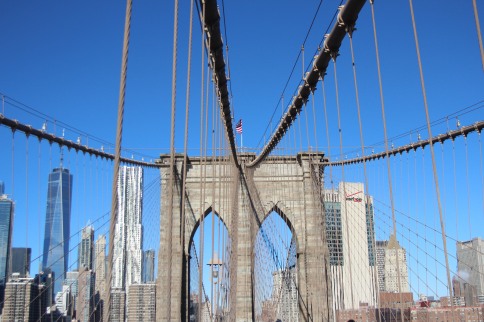 My mum wasn’t that fussed about seeing the Statue of Liberty by boat and I wasn’t either – the cold did not make it appealing in any way, but I did think it would be nice to see her in the flesh one way or another so we got back on the Subway and went round to Battery Park to look at Ol’ Lady Liberty. My mum’s main reaction was how small she looked. In fairness, we were very far away from her.

It was too cold to stand there for long, so we got back on the Subway and went up to Chelsea, where we had brunch booked at ‘Tipsy Parson’, an adorable Southern Inspired place. I nearly got biscuits and gravy but the mac and cheese was calling my name – I didn’t regret it. All the staff were lovely and the decor was superb. We were obviously there early on but the bar looked very well stocked so I’m sure its a good late night hangout too. 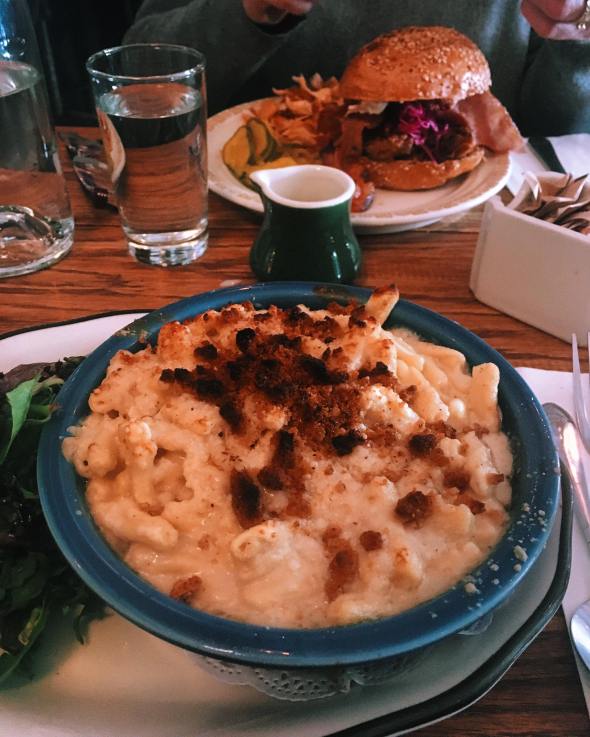 We had a beautiful brunch (go there if you can) and then walked down to Chelsea Market (an indoor arts/homeware/food market), where the rest of the world was hiding. It made complete sense for everyone to be there of course but it was a bit of a surprise going from zero people to hundreds in a small space. It was still lovely and we bought lots of different bits and pieces, including my new favourite ring, some awesome New York prints and a rad decorative glass bottle. If its cold its the perfect place to visit, in fact, even if it isn’t cold its great; especially if you’re with people that can’t make their mind up on what they want to eat. There’s so much choice for food it might even be a bit overwhelming. Thankfully we had already eaten so didn’t need to go through the (enjoyable) stress of picking.

I absolutely loved Chelsea and would love to spend more time there if possible, the streets were super peaceful and quiet for a Sunday morning yet still had some life about them with people walking their dogs. It was nice. 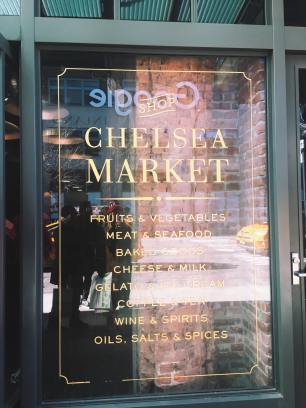 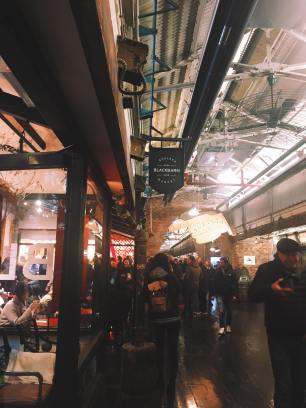 Once we had bought all the things we could carry (some might think we shopped ourselves silly yesterday, those people are wrong), I decided I wanted to look for some vintage clothes, so we wandered around some second hand/charity stores and then made our way back up to our hotel on the Subway where we dropped stuff off and then headed back out to our favourite place, the TKTS booth in Times Square. Since we had already bought some tickets from there earlier on in the week, we got to skip the queue and ended up being one of the first 5 people at the desks. We asked for tickets for Kinky Boots and were offered front row orchestra seats at half price (front row stalls). My mum didn’t really understand what they were saying and was hesitant, but I pushed and we got them in the end. 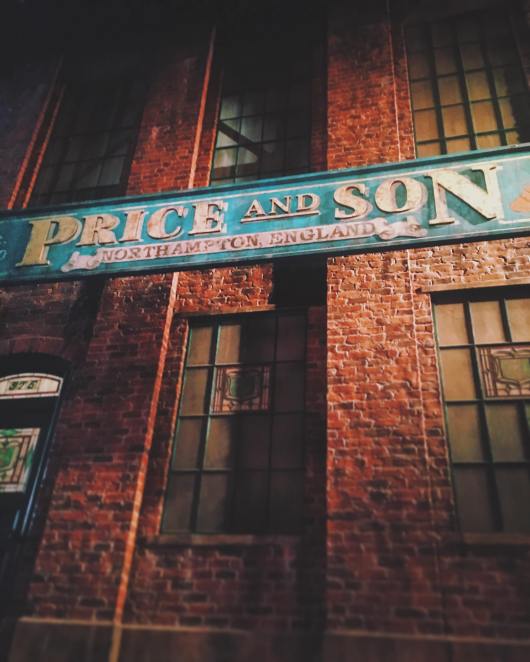 It was only later on when we actually walked into the theatre and continued walking further and further down to the front, that she finally understood just how great these seats were. Actual Jake Shears from the Scissor Sisters was in it and we were so close we could see the hairs on his legs. That’s probably not what I should note as my main take away/ what I would go with if I were asked to write a proper review of it but so far no one has asked me to, so thats the best I’ve got.

No, in truth, the whole thing was absolutely amazing – the singing, the sets, the costumes. I didn’t really know what it was about but I had a blast. The only thing that was a bit strange was hearing Northampton accents while in New York. For that reason (amongst many others), I would love to see it again on the West End in London. But that list is already very long so it might be a while before I get round to it (42nd street is at the top of it, for anyone considering treating me – hint hint, nudge nudge).

And with that, the trip was over.

In my first post about our NY trip, I wrote that it was for 5 days – strictly this isn’t true, as we were away for 6 days but the only thing we accomplished on the final day was getting from A (Our hotel, the Knickerbocker, in New York) to B (The airport, London Gatwick). Suffice to say, we did manage to do that but its not the most exciting thing to read or in fact write about so I’ll keep it short and sweet…

We woke up early, checked out easily and had a lovely journey home. It was only when we got home that we had a problem… The airline lost my mum’s bag. I still feel bad about making jokes that they had lost hers while I was stood there holding mine, watching other people’s go round and round…

Its been over a month now and we still haven’t got the bag yet. So, yeh, thats super fun.

Aside from that (very annoying) hiccup, it was an amazing trip and I had the best time. We saw so much while we were there and I cannot WAIT to go back. Maybe when its a * touch * warmer though…

And that’s it for the New York posts – Booo I hear you say. Yes I know, I’m terribly sorry. It must be a terrible inconvenience to read no more about the ups, downs, trials and tribulations, of two British women travelling around New York. Quite the mental, physical and emotional journey. The best thing since Eat Pray Love, is the most common thing people have said. Alas, that is what happened and I’m not one to make up things to make this blog sound exciting (I’m sure anyone that has read a single post on here knows thats very true).

I would usually like to take time at this point to reflect on my favourite parts on the trip but I enjoyed so much of it, its hard to pick. If I had to say, I’d pick downtown as my favourite area and the movie tour as my favourite activity, but everything we did was great fun and I would do it again in a heartbeat.

What I will point out is that in order to get all this stuff done, a fair amount of planning went into it. For some that’s the last thing they want to do when they go on holiday but it really did make a big difference to us. It takes the stress out of your day because you wake up there, already know what you’re doing and only have to worry about getting there. You can still leave gaps in your schedule to do things on the fly but certain things like the improv comedy, movie tour, NBC tour etc. need to be booked in advance otherwise you don’t get to do them. It only takes two seconds to do it all online from home but it will save you so much headache once you’re there.

P.S. We’ve been very busy since then, with London life, visiting Devon and Edinburgh and planning more exciting things, that I’ll post about very, very soon…