Usually I love the train journey up to Edinburgh – its about 5.5 hours long but it gives me time to write, read and watch tv in comfortable, warm seats. Usually moments when I get to do these things are slotted in in between stressful ones and are therefore very rarely dedicated just to this; a train journey allows that privilege because what the hell else are you going to be distracted by?

On a Friday night train up to Edinburgh, I found out the answer – I got on the train, walked to my pre-allocated seat (that I had booked over a month before) and it was not only double booked but triple, quadruple… Endlessly booked; as I was walking to the seat I saw the poor girls that had made it there first turning away 3 other people (and telling them about the numerous other people that had come up to them with that seat number also booked) so on a packed train I had the fun task of finding an empty seat for the duration of the journey. It took me a little while but thankfully as I was on my own I got lucky… Sort of. The train then got delayed by nearly 2 hours whilst I was on it meaning I arrived in the early hours of Saturday morning instead of just late Friday night. Not the relaxing journey I had hoped for. And you know what else, its been nearly a month and I still haven’t got delay repay for it (good work, Virgin).

Beaut weekend of all the food, all the drink and a chihuahua cafe in Edinburgh ✨

Anyway, petty rant about trains over… I was in Edinburgh to visit my very best friend, Hamilton. I’ve been up there a few times so it wasn’t for any particularly purpose. That is, until earlier on in the week I saw an article about a chihuahua cafe, which just happened to be in Edinburgh. I told Hamilton and we immediately booked to go that very Saturday.

Our booking wasn’t until the afternoon, so beforehand we went and grabbed some food (and a drink) from ‘Checkpoint‘, which according to their website is one of the 25 coolest restaurants in Britain. You know what, it was pretty cool too. I didn’t quite understand at first when he asked if I wanted to eat inside the container because somehow my eyes missed the giant shipping container sitting in the middle of the place but I said yes anyway and then found myself at a table inside it. I had some halloumi, a beer and a good time.

After that, we went for our scheduled appointment with the chihuahuas. It specified that the chihuahuas did not like to be kept waiting in the email, so we were there early. In fact, there was a queue of people ready and waiting. Honestly at this point, I thought it was going to be one of the oddest experiences of my life. Other people were walking past trying to figure out what the hell we could be queuing for and didn’t seem like they believed it when they realised it was for a chihuahua cafe. In fairness, I’m not sure I would have if I hadn’t of been in the queue myself.

The dogs were very timely and let us in at our allotted time (ok the owners did that, they’re not that good). They do ensure everyone knows the rules before going in, of course (don’t pick the dogs up if they’re laid in their beds, don’t drop them on the floor etc). We have been around dogs before so kind of figured this out but didn’t mind going through the process of agreeing to the rules for the safety of the dogs.

We were allowed the prestigious window seat and were very quickly joined by a chihuahua. This was where I thought it would get weird but honestly it was fantastic. Hamilton and I had an absolute blast. The chihuahuas had just been out for a walk so were a bit sleepy, which meant they were more than happy to lay next to us on the sofa and nap. The only thing that was a bit weird was finding out that the chihuahuas weren’t meant to look out the window because then they bark at people walking past and then all the other dogs in the cafe get excited and bark as well.

Some were sassier than others and refused to sit next to people, they just wanted to sit on the other dogs and annoy them, which was fun to watch. Hamilton and I made it our quiet aim to have as many dogs on our seat with us as possible by the end. The sassier the dog the better. If there had been a competition, I think we would have won. We had a good proportion of dogs, that all chose to be near us. And then, the hour was up and we had to say goodbye to our new friends.

If you’re thinking of going, do book in advance as they are popular. There were kids and adults there alike so don’t worry that you’re going to be the only adults there (we hadn’t even thought about this, we just wanted to pet some dogs). I really enjoyed myself and am happy to have found a new business venture/future dream career (dog cafe owner).

Now I’ll be honest, the rest of the day that followed was a bit of a blur as it mostly just involved drinking in different establishments – we went to a pub, a speakeasy, I think another pub, then to dinner (where we drank more) and then to a bar. Somehow I felt absolutely fine the next day but its a struggle to tell you about all of those places. 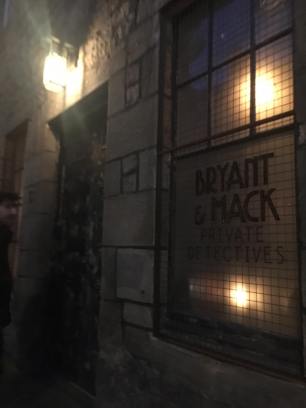 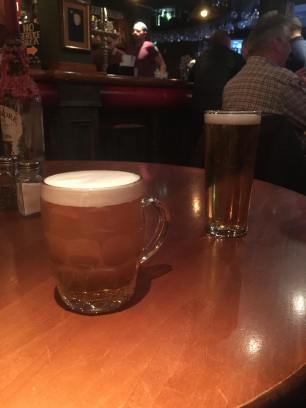 The main one that stuck in my mind was the speakeasy – its called Bryant and Mack, Private Detectives and of course (being a speakeasy) looked nothing like a bar. In fact it looks like its locked from the outside. Then you go in and its a cute little bar where you can get a range of quirky cocktails. It was quite busy but Hamilton had called in advance to book, so I assume thats the best thing to do (especially on a Saturday night) if you want to go. Its not cheap but I would definitely say its worth it for the experience.

Amazingly I woke up feeling fine on the Sunday, so we went for brunch at The Ivy which was delightful (the interior is something else), without being crazy expensive. Would definitely recommend. It is a chain so you don’t actually have to go all the way up to Edinburgh to experience one if you don’t want to.

We then spent some time booking something top secret but very exciting that I can’t wait to reveal closer to the time… And then I had to catch my train home.

I love going to Edinburgh and feel very fortunate to have such a good friend that lives there. Its fun seeing a city from the eyes of someone who actually knows the place and especially his eyes because he is always out and about doing stuff so has great recommendations. Plus, his brain is basically a map, while mine is a sieve, so its very pleasant to walk around with him and not have to think about where I’m going.