I’m not intending on sounding like a broken record but I feel like I write quite regularly about how I’ve been so lucky to live in a city as amazing as London, with a million things to do at any one time yet while I’m here without anyone visiting to show around, I find myself often going to the same places (namely my house/sofa/bed). It is so easy to do things in your own city yet it often bypasses us, even though when we go to other places we visit every attraction and landmark possible.

More recently, partly because I’m moving out of London for a bit, I’ve been trying to change that. A couple of weeks back, my boyfriend and I booked two tickets to St Paul’s Cathedral lates which are times dedicated to people coming in when it’s quieter and taking photos of the inside.

We were super lucky with the weather and it was sunny/warm. We walked around the main part of the cathedral first and gawked at the ceiling, remarking how it was mad it had taken us so long to get there. We had both been taken there as children but I think the architecture was slightly lost on me at the time. 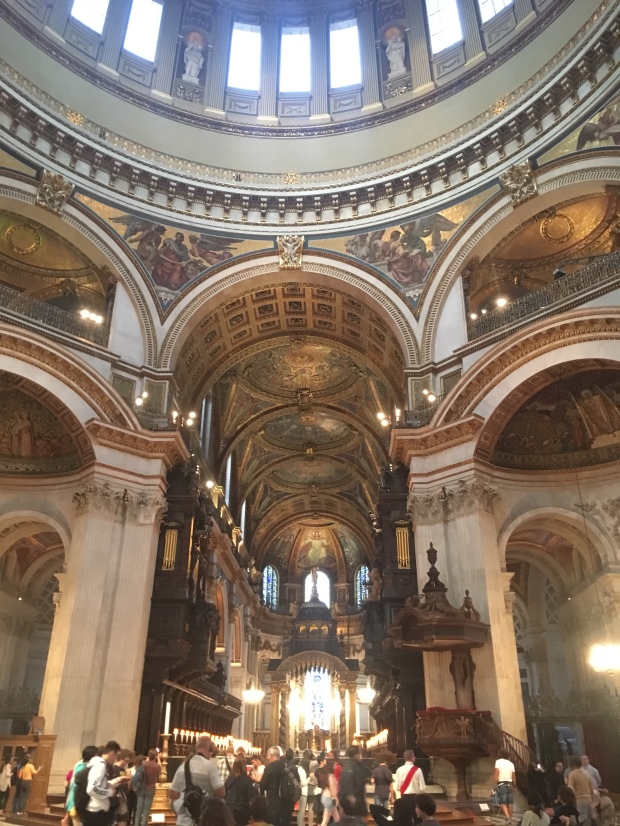 The main thing I remember from when I was a kid, is the whispering gallery where if you stand in the right place and say something, someone on the other side can hear you. My mum gets very excited about things like that and it seems to have rubbed off on me too.

Once we’d sat in that gallery for a bit, we carried on walking (it’s over 500 steps to the top and my body was not prepared for it) and finally made it to the top floor. The walk itself is up a lotta steps, including narrow alleys and spiral staircases that feel like you could slip through them. If you’re unfit or super scared of heights or both, this isn’t for you. We took our time getting up there and made it just as the sun was setting. It was pretty hard to take photos because it was so busy but the view was gorgeous and most importantly, worth it.

We had made dinner reservations for after the visit but these weren’t for another 30 minutes so we had a very slow meander round the Crypt, staring at graves of famous people from history before making our way to the exit.

I can’t say how busy it is during the day there because I’ve not been but I can confirm it’s lovely in the evening and a really nice after work adventure.

London has an abundance of fancy restaurants but funnily enough my budget has tended to favour the much, much cheaper ones. For once, we decided to treat ourselves and booked a table at Jamie Oliver’s restaurant, ‘Barbecoa’. It’s not mad money but also not somewhere to casually eat at every night.

We were definitely slightly underdressed but that might just be because other people had come from business-y offices, while my boyfriend and I work in media and don’t even own smart workwear. They still treated us very well and I didn’t feel like they looked down on us at all because we weren’t super smart.

We were seated at a window directly in front of St Paul’s Cathedral which is pretty impressive. I was facing away from it but my boyfriend had a great view of not only the cathedral, but also of course – me. 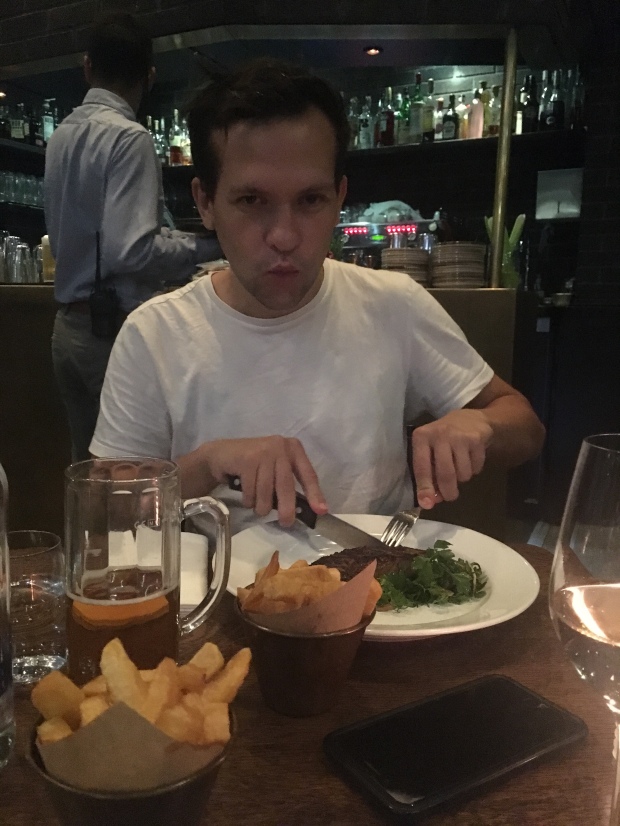 Everything on the menu is fairly straight forward and not overly fancy / confusing, which was exactly what we wanted. Fred had a steak, I had chicken and then we both had the most DELIGHTFUL desserts (plus an alcoholic beverage each). Overall it came to about £100 which is way more than I tend to spend but with the whole experience (nice atmosphere, great waiters and good food), made it worth it as a treat.

All in all, a solid Thursday evening.