To help my head process the fact that it is now 100%, definitely, truly 2018, here is a write up of our celebration that was meant to confirm this; over the New Year, a few friends, my dog and I rented a cottage in the gorgeous Lake District, in the North of England.

It was cheap as chips for a cottage over the new year – you can easily spend £1500 for a weekend during that time, which to us seemed a bit mental, so when we found something actually affordable (£500 for a house that can sleep 12), we leapt at it – it housed a bunch of us and had pretty much everything we needed for our stay, although yes, it was a bit rough and ready, I would definitely highly recommend it for a big group of people wanting a fun weekend away in the countryside without breaking the bank.

The cottage is on the edge of beautiful Ullswater and not that far from Penrith, which is in the Northern Lakes. I’ll be honest though, we didn’t make it out that much. Not only because the weather wasn’t great (though believe me, it wasn’t – it rained 70% of the time, which aren’t odds I would choose) but there were a few other factors, which I will explain further.

We arrived in darkness on a Saturday afternoon – we were intending on getting there in the light, but unfortunately traffic did not want us to. Then when we did finally arrive, it was… Challenging. The owners of the cottage had warned us that the road was a bit treacherous. I said this was fine – we’re from the countryside, not a problem. Alas, what I had in mind was nothing to what the “road” was actually like. In that, I’m not sure it actually could be called a road. I don’t even know if I would call it a dirt track. Personally, I would describe it as a field. As in, we drove through a field to get to the cottage, up a hill, in the dark. SUCH FUN.

On arrival the first thing we saw were a few dilapidated buildings attached to the main house filled with walls covered in children’s painting. At this point, I understood what it was to be in a horror film.

Thankfully after a slightly haunted night’s sleep, we woke up (alive) to a brilliant view and not too horrific weather.

The view from our front door

So, we made the most of it and went out for a walk. About a third of the way into the walk, the sky started to leak rain and the walk became slightly unpleasant. Nonetheless, we’re English so we soldiered on and had a lovely time. 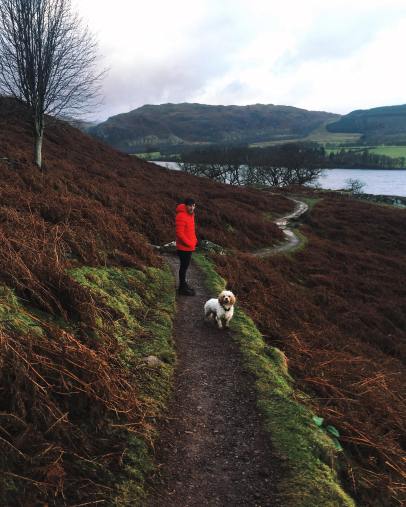 Aside from the weather and the dirt track that made it hard to get in/out of the property, we had one other issue… It was New Year’s Eve. I will leave the details of that to the imagination but if you are imagining lots of alcohol, crossed with hide and seek in a large country house, you are thinking correctly.

So the next morning, I had to drag my heavy head out of bed in order to take my dog out (still covered in glitter, in my pyjamas, while it was raining). Everyone was still asleep and I was a bit bored. It was freezing cold and I felt slightly worse for wear. But when everyone did make it up, we ate lots of food and went for another walk, which improved our situation slightly. 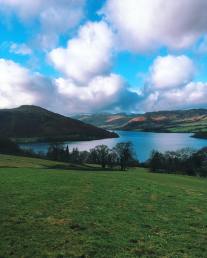 In all honesty, this is all we managed. The memory most imprinted on my brain from the weekend, is when my little car got stuck in the mud, in between three walls and a gate, whilst it was raining, and the (very lovely) owner of the farm came out and pulled it out with his 4×4 (I gave him a leftover bottle of prosecco, to say thank you), before I drove the 7 hours home with just my dog Bonnie, for company.

What I’m basically saying is, the Lake District is a lovely beautiful place with lots going on but I’m sorry to say, I only experienced a tiny amount of those things. Not that I regret it though – we had a great time, the weekend thoroughly served its purpose and if you want to follow in our footsteps, definitely do it. We did some beautiful walks, got to see our friends and had a lot of fun. I had absolutely no problem with where we stayed, in fact it was part of the fun. Its a place absolutely filled with character including lots of nooks, crannies, secret hiding places and board games from the 80s. What’s not to like?

Plus, if you feel like actually getting out and about, the area is beautiful and perfect for all the family. If you decide to go out, that is…

So, yeh, if you were hoping for some recommendations of Lake District activities, this blog post is not the right place. My apologies. What I can recommend is the cottage we stayed in (Bonscale Cottage, on Swarthbeck Farm). If the above sounds like your cup of tea, definitely go for it.