Being the brave adventurers we are, last month my mum and I left the averagely cold weather of London for the extreme cold that was New York at the time. We were there for 5 days and did about 5 million things. Not bad going. Plus, after panic buying jumpers and squashing them into our luggage, when we arrived the worst of the freezing temperatures and snowy weather had gone, leaving us with a mild -7 at worst and a jolly +4 on average.

We booked tickets after the economic miracle of the Norwegian Air sale, meaning flights were relatively cheap and you know what, the flight was probably the best long haul one I have ever experienced. I had enough leg room, the seats were wide, there wasn’t much turbulence (not sure if they actually have anything to do with that but if so they did a good job) and the on board entertainment was pretty good. The screaming baby even managed to hold out until we landed.

Then once we landed, we didn’t have to go through the hell that is the entry queue at JFK and instead went through the express entry side because we had both been to America on the same ESTA before and apparently that meant we could go through with actual American people. The only slight hiccup was being taken to one of those little rooms you see on TV because the airline had put my date of birth in wrong but thankfully they’re intelligent enough to know that I couldn’t have been born on the non-existent 25th month of the year and I left within seconds, with a message for the guy that had taken me into the room to “never do that again”.

Once released, we jumped in a cab – from the proper line, where they print you out a ticket saying how much it will cost you to get where you need to go to stop cabs overcharging (Great idea, New York), and we were on our merry way. Our flight was first thing in the morning, so it was only midday by the time we arrived at our hotel and we were able to hit the streets running. Well, it was a bit icy and we’re safety conscious so it was more of a jaunt, but still, we were in New York.

With only 5 days to fulfil all our New York hopes and dreams, we had a lot to cram in. Our first stop… The Empire State Building. The last time I went it was July 4th, absolutely packed and we queued for hours. For us it was so free of people we probably could have run up. 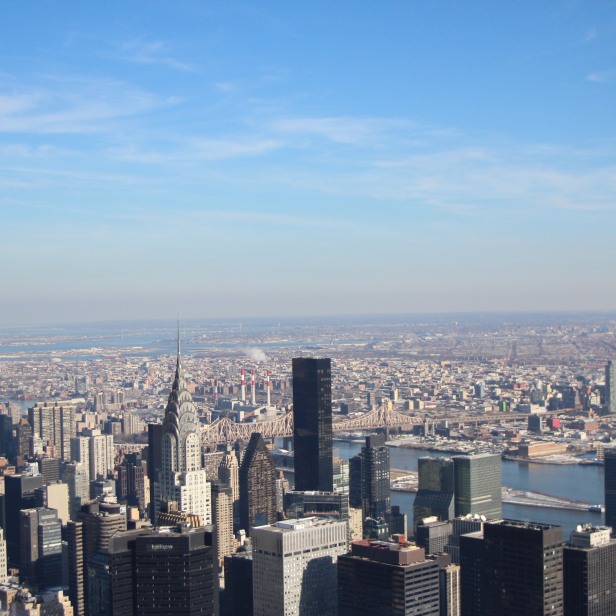 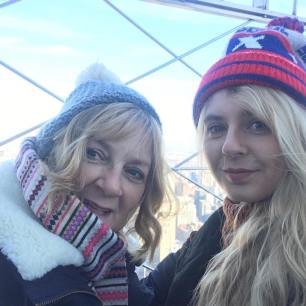 We had picked up our New York Passes on the way so we didn’t have to pay anything for the ticket, we showed them the pass, they gave us a ticket and we got in the lift. There was a small queue for that but it went fast; the people that work there are super friendly. One of them even took the time to compliment my backpack. Well, actually he asked me if I made it myself and was then disappointed to learn that I did not (It was from Notonthehighstreet though, so someone made it).

Going up the Empire State is actually such a great thing to do as soon as you arrive, not only because its a classic New York experience but also because you get a real feel for the city up there. The grid system means you can clearly see a million things happening at once, which gives you a nice reminder of just how big the city is and a large shove to get your ass in gear in order to experience it yourself.

So even though we were jetlagged, tired and continuously stopped by people selling bus tickets, we headed back out (honestly how do they know when you’re a tourist, we just had coats on like anyone else, its quite impressive on their part).

We weren’t far from MOMA and again, it was included in our New York Passes so we wandered round there. After being in tourist central it was nice to be among normal, like minded people to ourselves (aka not big tourist groups that want to take a selfie with nothing every two seconds). MOMA isn’t just tourists and it felt like a breath of fresh air after the empire state.

The last modern art museum I took my mum to was in Montreal and it was weird as hell. All of the normal exhibits had been closed for refurbishment so we were left with whatever they’d left up… I think my eyes would have rather they’d taken it down and we could have looked at the building site.

This left MOMA with the job of restoring my mum’s interest in the modern art world. No big deal or anything. Thankfully, it lived up to the mammoth task and we had a great time. It was just the right size to walk around and enjoy without completely exhausting ourselves. The collection is amazing, ranging from Monet’s ‘Water Lillies’ (to which mum commented “Wow this looks a lot like that famous painting of Water Lillies” / “Yes Mum, this is that painting” / “Amazing”), Van Gogh’s ‘Starry Night’, Salvador Dali’s ‘Persistence of Memory’ and Lichtenstein’s ‘Drowning Girl’ to Jasper John’s ‘Flag’ (my personal favourite).

We spent a few hours there before jetlag really hit and went to John’s Pizzeria, just off Times Square, for some damn good pizza and beer plus a gander at their lovely ceiling. We also saw some real life NY cops chilling out eating in there, which is how you know its a good place to eat. Well that or something was going down and we didn’t know about it.

Amazingly, that was all in our first day of arriving. The best bit, we stayed at The Knickerbocker Hotel, one of THE most amazing hotels. Its just off Times Square, has a rooftop bar, all the amenities you need and the biggest shower cubicle I have ever seen. More on that later though.

That’s it for our first day but there are still another four to go and boy did we pack it in.

Been MIA for a little while due to a certain *pandemic*. I had a few trips booked but they’ve all been put on hold so I’ve been trying to make the most of staying local instead (mostly my sofa, to be precise).
Just posted a new blog on the best 5 places I have ever stayed - from Canada’s Vancouver Island to France’s Loire Valley, I’ve been so fortunate to stay at some incredible hotels and unique accommodation which I wanted to share in case anyone is looking for some inspiration! As per usual, the link is in my bio ☀️ #blogpost #travel #travelgram #canada #amsterdam #france #loirevalley #wineregion #loire #wine #idyllic #mustvisit #top5
New post on the blog about our day spent at the Postal Museum in London (including a trip on Mail Rail 🚂)
A little listicle to go with your morning coffee today - my top 20 museums/art galleries from around the world.