We left for the airport bright and early, arriving at just the right time to check in for our flight to Calgary – we would usually check in ahead of time, but hadn’t stressed too much about it for once.

It wasn’t until we reached the departure gate that I realised this could be any kind of problem. The lady behind the desk was stressing / faffing about for ages; letting everyone else on the plane before providing us with our tickets. Once she finally gave them to us, we immediately noticed that our ticket numbers were considerably different, but it wasn’t until we got on the plane that we realised why…

My mum had been upgraded to business class.

So as she sat back in her large, comfortable chair. I squashed in between two ladies at the back, that as it turns out, were not interested in talking. I wasn’t expecting anything other than cattle class though, and still had a TV screen, so wasn’t too bothered – with a documentary about National Lampoon’s to keep me occupied, the flight went by very quickly. I was just excited to get off the plane to grab something to eat.

Turns out my mum wasn’t too stressed about this though. As she’d been fed MULTIPLE times throughout the flight. Alright for some, eh? Blimey.

I jest, of course. It was good of them to upgrade the ticket, even if just for one of us. I still had a seat and everything, so I can’t really complain!

We arrived at about midday, where we had roughly a 30 minute wait for the transfer I had booked to Banff, so I had time to grab something to eat and get used to being surrounded by English speakers again. Honestly, we immediately felt a difference. It almost felt like being back in America again.

The drive to Banff was gorgeous, and although we were starting to get a little weary, we were very excited to get our hiking boots on in order to experience the scenery for ourselves; we checked in to our hotel (The Mount Royal), got changed and went straight to tourist information, to enquire about where to go. We only had one day/night there, so wanted to make the most of it.

After an (accidentally large) lunch, we settled on Tunnel Mountain, which you can walk to from the centre of town without much hassle, within about 90 minutes. From there you can see all across the valley, and into the town, which is a pretty good result for such a short walk. 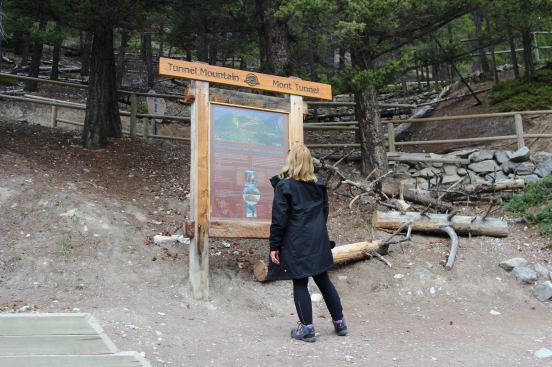 It’s quite a busy walk, full of switchbacks, and isn’t a circular route, so you’ll encounter a lot of people looking very pleased with themselves coming down, while you’re huffing and puffing on your way up.

There’s no tunnel there FYI. They intended on building one for a proposed railway route, but it never happened. Nonetheless, the name remained.

After the hikes in Shenandoah and Great Smokies, I was well prepared for some constant uphill and we made it up there in good time. Good enough time, in fact, to make it from the hike to the hot springs (by bus) to soothe our muscles.

It’s only around $7 (Canadian) dollars for a dip, and it’s definitely worth it. Ok, yes, it’s a man made pool, but believe me, haters, it’s still worth it. There’s nothing quite like going outside in the freezing cold in your bikini, and slipping into boiling hot water, with a view of the mountains around you.

It was April at this point, so not that cold, but still ski season. To us, it was pretty cold. Whilst chatting to people in the pool, however, we realised that this was nothing – a lady told us that she was used to experiencing -20 degrees for weeks on end. It was practically summer for her.

Suffice to say we were pretty knackered by the time we finished there, so hit the hay, ready for some potentially literally hay encounters in the morning…

Just a heads up, Banff is quite an easy place to get around without a car by the way – whether it’s in the way of buses or friendly people that are going the same way as you! But, I will admit that I missed having a car. Ok, I didn’t have to think about parking it or anything, but I also never had to worry about standing in the cold for a potentially non existent bus.

If you have the option, definitely treat yourself and get a car. Nevertheless, you’ll survive without.