We left our lovely apartment in Quebec City bright and early (*tears*), and after a fair amount of kerfuffle involving finding our rental car in the car park, a parking inspector and some steep hills, we made it out of the windy streets and back on to the highway as we headed for our next destination… Montreal.

I had heard a lot about Montreal, but truly did not know what to expect. I knew that it was a big city, with it’s fair share of history and a big, art scene. We arrived in a somewhat random way, as we realised we wouldn’t need a car whilst we were there, so after a short relationship, dropped our lovely rental car off en route and then got a cab in to the city.

It was as soon as we got into the taxi, that we realised we’d booked a hotel with the most ridiculous name possible… It was literally called L’Hotel, aka ‘Hotel’. I think its meant to stand for ‘Love Hotel’ but I’m really not sure. Anyway, it caused constant confusion during our two days in Montreal. I ended up having to carry around the full address of the hotel to stop arguments with taxi drivers that thought we were taking the mick.

Nevertheless, once we got there, the hotel was really cool. It’s owned by Georges Marciano, the co founder of Guess, and is absolutely full to the brim with modern art. Wandering the (generally empty) hallways, felt like being in our own private gallery. Our bedroom even had a Roy Lichtenstein up on the wall (as you do) . 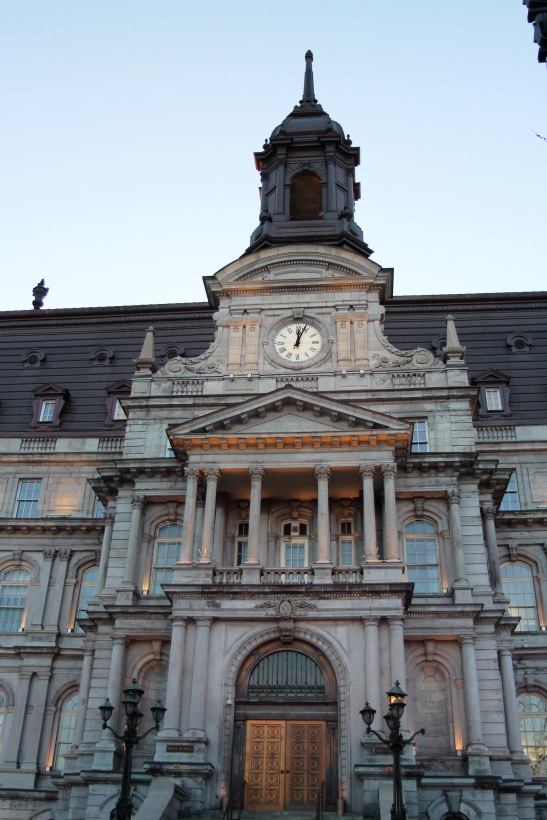 We did eventually leave the hotel, but we had arrived late and it was almost as cold as Quebec City, so didn’t manage much more than a wander past the Notre Dame Basilica and around the port, before escaping the outside again by stepping into a restaurant.

The next day was much more prosperous; we went into a cool hipster cafe for breakfast, then to ‘Chateau Ramezay‘. Which is a sort of living history museum aka there are people dressed up like they’re from the past to tell stories all about life in Montreal through the ages. It was fun, albeit a little cheesy. I won’t act like my mum and I didn’t enjoy the interactive activities designed for children though. Because we definitely did.

Then, we braved the cold yet again, and walked over to where a lot of the art museums are. I’ll say at this point, Montreal was not as pretty as I thought it would be. Around Old Montreal it is more so, but Old Quebec City is much prettier. IMHO, of course. We stumbled across a Modern Art Gallery, which I generally love, so took my mum inside… The only exhibitions open were showing films, which I must admit, are normally quite odd in these circumstances. I studied film at University, so I’m used to them, but that doesn’t mean I necessarily like every one of them, or indeed want to watch them.

Seeing as my Mum had never been to a Modern Art gallery full stop, this was all a bit much. I normally find the films are a bit of a random, though welcome, break in a gallery, but just these videos weren’t the one. So we didn’t spend too long there! The architecture of the building was beautiful though, and reminded me of the inside of the Pinakothek der Moderne in Munich.

After this, we grabbed some lunch and cleared our brains of what we had just witnessed, and then headed over to the Montreal Museum of Fine Arts. It was getting on by this point, so had a quick wander around the general galleries, before entering the bit we were there for; an exhibition about Pompeii.

Super random, I know, for us to be in Canada and go to this, but it had to be done. It was an extensive collection of artefacts from Pompeii, that you can’t see just anywhere. Plus, there were men dressed up as scantily clad Roman Soldiers near the entrance, so…

Honestly though, it was a truly moving exhibition and I found myself holding back tears at certain points as each room told the story of what people’s lives were like, before showing what happened at the time of the eruption and how people tried to run.

Apparently the exhibition closes on Monday, so if I’ve sold you on going, get down there now!

And that was about it for our time in Montreal! The next morning was an early one as we were jumping on a jet plane. Not for the end of our trip of course, just for the next chapter…

One thought on “LOVE, ART, FASHION (AND THAT WAS JUST THE HOTEL) | MONTREAL | CANADIAN ROAD TRIP 2016”