With a flight booked for mid-afternoon, we were well aware of making the most of our final day in sunny Berlin before we had to return to London; we got up, got dressed, took some selfies and made our way onto the U-Bahn in record time. 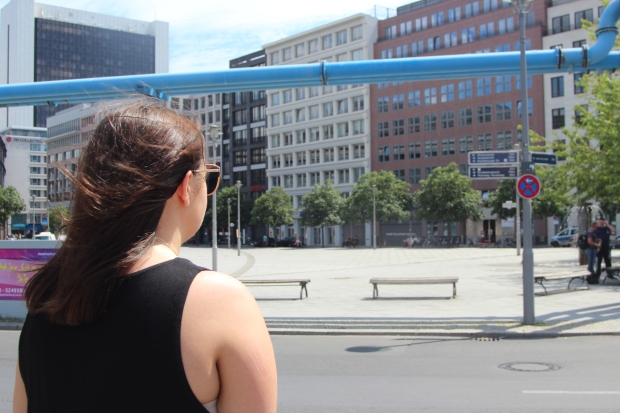 Our first stop, was the ‘Topography Of Terror’ – something that had been pointed out to us on yesterday’s walking tour and was highly rated on Trip Advisor. In all honesty, I had no idea what it was before getting there, but after visiting, I can say that I’m glad I was wearing sunglasses. Not just because it’s an open air exhibit, but also because I didn’t want all the school groups to see the tears in my eyes.

To clear up what it actually is; it is a collection of stories about people that were involved in the atrocities that took place in Berlin. There are pictures, news stories, letters; all kinds of documents that make up for an engaging, but emotional read. If you are in Berlin, definitely take the time to visit and read the stories; it’s located right next to a large section of the remains of the Berlin Wall, and this in itself is better than any history class you’ve ever been to in the way of immersion.

I didn’t take any pictures here not just because I was too busy getting through the crowds (be warned: it’s very popular), but also as it didn’t feel quite right to. Go, have your own experience there, you don’t need to see my pictures of it.

If you're in Berlin and have any interest in Film/TV, then go here RIGHT NOW. No pictures are allowed inside due to copyright, but it's such a well designed, visual museum. Great even if you know nothing about German Media. #Berlin #Germany #Filmandtv #media #scifi #museum #filmandtvmuseum #filmmuseum #Todo #berlin2016 #Travel #travelblogger #travelblog #citybreak #architecture #future #travelgram

For the start of our day, this was pretty heavy going, so our second stop was something a little different; the Film and Television Museum. I can’t say I knew many German films/tv shows before visiting, or actually, now. We did have a great time though.

It’s located in a super futuristic district, in a glass building, with a glass lift. The layout inside is so well done, it’s unreal. Supposedly you weren’t allowed to take any pictures, and judging by the random members of staff that appeared behind us unexpectedly, it was a rule they intended on keeping in place, so I don’t have any of my own to put here to prove this. But images do exist, and take my word when I say it really does look like this.

Both Naomi and I definitely gripped on when walking into the mirrored rooms because when you first walk in it genuinely looks like you’re on a walkway suspended in a massive room. Crazy.

As well as these cool layouts, they had all sorts of awesome props (some of which we had absolutely no context for because they were in German) and it was super well put together. I can’t say it particularly mattered that we didn’t really know many of the shows/films mentioned, but if I did, my mind would have been blown. If those had been Hollywood films I would still be there now.

My only comment would be about the sci-fi section which Naomi and I first assumed was super small… Until a member of staff walked in and parted what we thought was just a tv screen, but turned out to be a curtain with a projection on it, behind which many people were milling about who had obviously already figured that out for themselves. Bit embarrassing to say the least.

I’m telling you this so that you don’t make the same mistakes we did; everything is not the way it might seem in this museum. Well, if you speak German it might seem exactly the right way. If you don’t, there’s a bit more guess work involved. 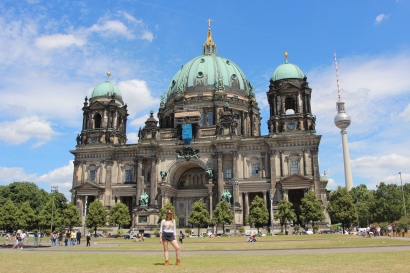 Once we found our way out of there, we hopped back on the train, and walked along the river bank where a market was taking place, selling art, homeware, bric a brac; a fancy car boot, basically and had a mooch. It was absolutely boiling hot, and it was pretty nice. I could see myself strolling down there with an iced tea every Sunday if I lived there.

Our end goal here, was the cathedral, which we had sort of walked past the day before but not got a good look at (it’s pretty nice fyi). After taking some photos for other groups of tourists and then some pictures of our own, we laid on the grass and melted slightly in the blistering heat (like London this week, basically), enjoying our last few moments in the city before we began our long trek back to the hotel and then the airport.

We managed this fairly swiftly and arrived at the airport just in time to see that it had been delayed. Fantastic. Our terminal was rife with exciting shops and bars (not); two corner shops, a burger king and an ‘Irish’ pub, to be precise. We were not that enthralled, as you can imagine. Thankfully though, we had the energy to make up some games to entertain ourselves, and after a disappointing Burger King, made it onto the plane and back down onto the green, green grass of home.

I don’t think we managed to quite capture the magic of Berlin that I hear people talk about, as we focused mostly on the historical side; there is so much that has happened there, it only felt right to do it this way. I’m sure we’ll return sometime soon, and see what people have been raving about.

For now though, I’m pleased to say I’ve been, but you won’t see me preparing to live there any time soon as I know many others are.