After a long, problem filled day, travelling from Dearborn (Michigan) to Toronto via Niagara Falls (blog post can be found here), our heads could not have hit our pillows more readily. Thankfully the hotel was nice, and we were able to climb into our beds without issue. We slept well and before we knew it, were wandering the streets of Toronto.

Our hotel was in the entertainment district, but unless you have any kind of clue what’s actually occurring there, it doesn’t look like all that much. You can say the same for any city I suppose, but seeing as we hadn’t really researched that much up Toronto wise other than the big tourist-y things, we weren’t really sure what we were looking at.

Thankfully, Toronto is an easy city to get used to, and a pleasant one. You can walk between districts in 10 minutes or so, and each one has a different vibe. It’s pretty cool.

Our first stop was the CN Tower, which in all honesty, I didn’t love. I’ve never been a massive tower fan though, so it could just be me – you might love it. I just didn’t find the experience there particularly pleasurable.

Firstly, it costs $35 (Canadian) dollars to go up to the normal level, and an extra $12 to get up to the ‘sky deck’ (which we did not do), I mean that’s a lot of money to be high up right? Secondly, we got there almost when it opened, and were amongst some of the only ones there, but were still forced to endure the longest walk to get to the lifts around the queueing system, and had to have photos taken. Thirdly, the CN tower is kinda the thing you think of in the Toronto skyline… That’s what you wanna see.

This probably makes me sound like a massive grump, and maybe I am, but I don’t think I would pay that again for what I got out of it. If I could go back in time I would probably just spend the money on even more maple syrup.

Anyway, this was one, Touristy part, of what is an awesome city; I loved Toronto, and can explain why below. 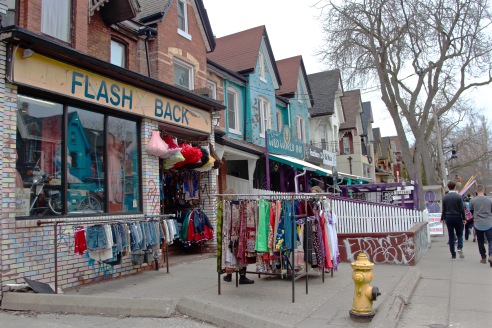 One of my favourite cities in the world is Brighton, and so I can’t help but try to find it’s equal, or at least relative, during my travels. San Francisco was the closest I’d got before this, but Kensington Market jumped straight up the ranks; it’s a super cool area filled with independent stores, cool coffee shops and all sorts of artsy places that are well worth checking out.

We walked there in about 30 minutes from the tower, passing through the largest Chinatown I have ever seen, and I immediately fell in love. If I had more money I would have needed way more suitcases (I did actually have to post stuff back to myself in the end!).

I originally wanted to go there because I’d heard such good things about ‘Courage My Love’ (Which is a cool store), but I didn’t realise until I got there just how good the entire district was. It’s really weird; such a short walk from all the offices and high rise buildings, are actual little houses and neighbourhoods. It felt like home.

If you like vintage shopping, this is the area for you; the shops Flash Back, and Exile especially. I got a pair of cowboy boots, a Maple Leafs jersey and a dress for about $40, which is about £23. I can’t say it’s likely I would have got any of those items on their own for £23 in Brighton, never mind all of them together.

Once we’d all had our fill from their many vintage stores, we then grabbed a coffee (tea for me, of course) before continuing on to AGO. Tickets are only about $20 and with that you get a tour, which we arrived just in time for; there was a small group of us, and we were the youngest by a fair amount, but everyone was really fun and the lady taking the tour was so excitable, and engaging, so this made no difference. 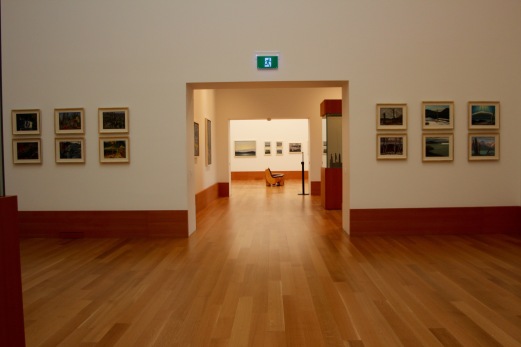 I could go on for hours about the things we learnt there, I mean she told us about everything ceiling to floor, bricks to mortar, stairway to stairwell… You get me. They have some really interesting art work there, including beautiful, utopian paintings that were shown to people all over the world to entice them to come to Canada. Suffice to say they worked, though unfortunately they weren’t quite true to life; Canada is a beautiful country, but it’s hard to get the bitter cold across in a painting.

Recently I feel like all I’ve done is recommend tours, but for real, they’re great. As long as you get a good person taking them, they’re the absolute best way to experience a place you know nothing about. Unless of course, you have the time to really experience it for yourself, that is.

Once we’d finished the tour, we had one thing on our minds… Food.

We stumbled upon a restaurant called Bannock, and boy am I glad we did. I had cod chowder (which I could eat again right now), with maple lemonade, and we all splurged on some poutine to share (because we’d never had it and wondered what the hell it was – turns out it’s basically really good fries, with cheese and gravy). It was SO GOOD. I can’t really compare it to other places in Toronto because I didn’t have time to explore them all, but I’d definitely recommend that place. I can say that.

Time was getting on by this point, so we walked back to our hotel and got changed before the long walk (two streets over) to our evening entertainment… The Second City!

For those of you that haven’t heard of it, it’s basically one of the world’s best comedy clubs, that also trains people in the art of improv. Some amazing people have stepped through their doors, and I was excited to be one of them, even just as an audience member.

By this point, we’d already had to bypass the original one in Chicago, and I was about fit to burst with excitement when we got tickets to the evening show of ‘The Hotline Always Blings Twice’, their revue show.

I’d read so much about The Second City (from Amy Poehler and Tina Fey’s books), and all their famous alumni (Mike Myers, Dan Aykroyd, Steve Carrell, the Broad City girls, to name a few… ), I was a bit worried it wouldn’t live up to the hype I’d created in my head.

… I shouldn’t have been.

I won’t even try to explain what goes on in the show, because I won’t be able to do it justice, but for definite, if you’re ever near a Second City, buy a ticket. You won’t regret it. Stay for the improv scene at the end too. Embrace the weird, and you’ll have a great time.

This was the last night that Dan, Hamilton and I would be together before they left me (plays tiny violin), so of course we didn’t end it there. I’m not 100 percent where we went because I was knackered and seeing through half closed eyes, but I do know there were many drag queens and a ‘best chest’ competition involved (men’s chests, that is). Yes, it was as hilarious as it sounds.

As fitting a last night together as we could ever have, I suppose!