And on the third day… We got a car. A lovely, little shiny red one. Once we found it, that is. 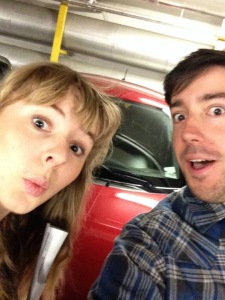 Out of the four of us, Hamilton and I were the only ones that could drive, so we wandered over to the car hire place and got ourselves a car whilst the others finished tidying our mansion-like apartment. We hired from Budget, which honest to god was great. As both of us were 21,  had forgotten our counter part driving licenses and didn’t speak a single word of Norwegian (we did attempt to learn, but didn’t want to offend anyone with our poor accents) we expected some issues. In fact it was quite the opposite! We arrived, I showed them my forms and our driving licenses, and then the lovely man that spoke perfect English let us choose our car out of a selection. I can’t say that has ever happened before. Ever. The selection that is.

I can’t remember what the other cars were, but we went for a Suzuki Swift. Whom we named Svetlana. She was fab. We did have a bit of trouble finding her in the car park, but it was love at first sight once we did.

Ok, yes she was tiny, and had barely any boot so everyone was a bit crammed in. Oh and when we were in it did not enjoy going forward, especially seeing as we spent most of our time going up and down mountains, but you know what, none of that mattered. Between the four of us it worked out ridiculously cheaply (including petrol) and she had a good stereo system. Also, a car any bigger on my first time driving on the other side of the road in a left hand drive car may have been a bit much. (I shouldn’t have been worried though, Norwegian roads are beautiful. I would have been confident driving an van round there.)

Anyway, so we picked her up and took her home to the others. When we packed the car/sardine canned in and started the drive to Flam. It was a four and a half hour drive there, which is a long old drive being in a new car in a new country, but it was great. And beautiful, as you’d expect.

Hamilton drove half of the way, then I grabbed the wheel after a lunch break at McDonalds (we were in the middle of nowhere and there was little else around so it was a safe place to start. I swear.)

One thing I will say about the McDonalds, is that they had THE BEST rubbish system. A weird thing to comment on, I know. But it had holes for all of your rubbish to make sure it got recycled properly. Fun for all the family, right there. I did just search online, but surprisingly no one else was as excited as us about it, so no one seems to have taken any pictures.

I was a bit worried about the driving, I’m not going to lie. And there was a lot of door stroking whilst trying to change gear and forgetting it was on the other side at first, but other than that I got the hang of it quite quickly. Because we were on the other side of the road it felt natural to drive that way.

Anyway, we drove from Oslo to Flam, a small town by a fjord. It isn’t the most exciting place, I’m not going to lie. We were only there for one night and that was enough. Well, dependent on what you want to do. If you’re looking to go kayaking/mountain biking then it’s great. I believe there is also a pub and brewery, but knowing how expensive beer was we were a bit scared to attempt to buy beer from there!

Anyway, we arrived a bit late on in the evening and had to leave a bit early the next day, so didn’t quite manage the adventure sports. We did, however, stay in an adorable little cabin and have fun chilling out with a few drinks by the waterside.

This is one thing I will say, that I’m not sure if I’ve already mentioned in another post… Although the day light hours are very long in Norway, their shops and museums etc still only stay open for the normal length of time. Even in England places normally stay open until about 7 nowadays.

I believe it’s mostly know as somewhere the cruise boats come in to (I could be wrong there!) so that’s how I heard of it. I think if I were to do it again I may have gone to Aurland’s centre,  but I don’t actually know what that’s like either! As a stop over on the way to Bergen, it was lovely. And nice after a long journey.

Another big difference between England and Norway, is that there are all these beautiful expanses where there is pretty much nothing aside from a cabin or two. Who lives in these cabins I have no idea, but I’d love to see how they actually survive… Hence, a lot of the time all there is is small towns. That’s part of it’s charm though. For me, my year had been a bit crazy, so aside from all the driving, it really did feel like a break. I’d never really been anywhere like it, but it was these long drives that really made me fall in love with the place. It was like driving through a film at some points. Especially the tunnels. Oh, the tunnels. I’ll come back to that after Bergen though.

But it was nice to know that we were off to the big ol’ city of Bergen the next morning!

I wish I had more exciting things to tell you about this leg of the trip but unfortunately I don’t! For us, Flam was all about our gorgeous cabin, little red car and a small child that liked pizza boxes a little bit too much. (I just can’t even go there) 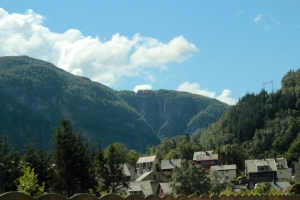 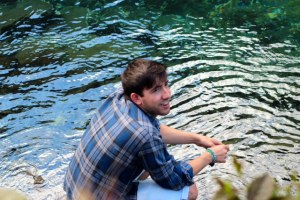 P.S. Some of those photos are copyright of Mr Dan Wardle. Please don’t steal them. Thanks.

Been MIA for a little while due to a certain *pandemic*. I had a few trips booked but they’ve all been put on hold so I’ve been trying to make the most of staying local instead (mostly my sofa, to be precise).
Just posted a new blog on the best 5 places I have ever stayed - from Canada’s Vancouver Island to France’s Loire Valley, I’ve been so fortunate to stay at some incredible hotels and unique accommodation which I wanted to share in case anyone is looking for some inspiration! As per usual, the link is in my bio ☀️ #blogpost #travel #travelgram #canada #amsterdam #france #loirevalley #wineregion #loire #wine #idyllic #mustvisit #top5
New post on the blog about our day spent at the Postal Museum in London (including a trip on Mail Rail 🚂)
A little listicle to go with your morning coffee today - my top 20 museums/art galleries from around the world.