My god, I’m not very good at this whole regular writing thing… Apologies.

I do have some exciting plans to share that were organised in the mean time, but I’ll keep those to myself until after I’ve finished Norway. I’m very excited to share my plans, especially the planning in particular (I’ve set up a google doc folder and everything). This will spur me on to tell y’all all about the fun of Norway, I’m sure.

Day 2, was an amazing day. Mostly because it was my 21st birthday. But also because we did some fun stuff.

As I mentioned before, one of the amazing things about Oslo is that you can walk everywhere. Which we did. We visited the film museum in Oslo, which was… Interesting. We had great fun, though I’m fairly sure that we weren’t the target audience. When you don’t know much about Scandinavian cinema a few things escape you. I loved seeing all the displays though – there were a lot of things you could touch and play with, such as cameras and projectors, and there were lots of costume and films being shown, so even though we didn’t necessarily know the films that the props were from, it was still really interesting. Also, they gave us a guide that was in English. (When I say we didn’t know the films, we could see what they were called, but we didn’t recognise them)

We even watched most of a black and white Norwegian film about Oslo. To be honest, I have no idea what happened. But we enjoyed making up what was going on nonetheless. All I know is a little boy we all fell in love with got run over. So, yeh. We also saw some amazing animations – I’ll look some of them up and copy a link in to here soon because seriously, they were beautiful. They were definitely made for kids but we were all in awe.

*Update* I didn’t manage to find out the name of my favourite animation. But I am going to go off and watch all of these animations myself: http://www.nfi.no/english/_attachment/107158

After this, I can’t quite remember the run of events, but I know we saw the Norwegian Parliament, the Royal Palace, went to a Bufhaus and went to the National Gallery. We didn’t go to the Munch museum, just because it was quite expensive, and a lot of Munch is displayed at the National Gallery anyway, including the Scream. Though to be perfectly honest, it wasn’t my favourite work by him. The Norwegian’s really do have some amazing artists, that I knew very little about. Excuse my ignorance, I don’t come from a particularly cultured background when it comes to art, but I feel this trip very much helped that! The National Gallery was one of my favourite parts of the trip to Oslo, as was the Met when I was in New York and the National Gallery of London is when I go up there.

Oslo is a beautiful place, with a real sense of calm about it – although we did go to all these places, we also spent some time sat by fountains and by the waterside just chatting and relaxing with a drink. A crazy 21st birthday, I know.

One thing I will say, is that the Royal Palace ain’t got nuthin on ours. To be honest, it looked a lot like West Wycombe House which is very close to where I’m from.

Saying that, the ducks were nice. And the guards.

And that is all for Oslo really. We had a beautiful evening that night, just chilling in our apartment and preparing for the next day’s adventure… When we picked up the car and the real fun began. (AKA the calm before the storm)

I love travel, and a big part of that is seeing and doing things. But a much bigger part of that, is doing it with people you love. I know that I could go travelling by myself, and I’ve heard a lot of good things about it. But there is something very special about sitting on the side of a cliff with your best friends in Norway. There are so many things I’ll never forget from this trip, and a lot of them are thanks to my friends and their wonderfulness.

I didn’t do anything crazy for my 21st, I had a party before Norway but it really wasn’t my cup of tea. Exploring another country, is way more up my street.

P.S. Dan and I have a video coming soon. Including shots of the Atlantic Road. So, yeh. Stick around. There’s some good stuff a’coming. 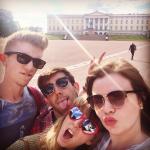