Following on from the last post, in which we travelled from London to Edinburgh, then up to Inverness – at this point in the journey we were staying just outside Inverness at Balnagown Estates.

We stayed there for two nights, using it as a base to explore Scotland and honestly, it was the best decision we could have made: we were in a small cottage (Peat Cottage) within the grounds of a huge, gorgeous estate and as a couple, it was absolutely perfect for us. 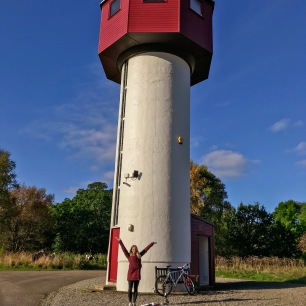 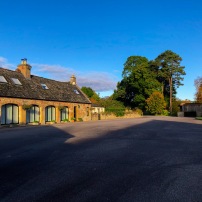 The staff are incredibly welcoming and there are lots of lovely touches within the cottage that make it feel like home. Plus, the facilities of the estate were fantastic and the staff really make you feel as though they want you to use everything they have on offer; free bike hire, a viewing tower which they give you a key to upon arrival, a games room (which is basically a huge sports hall), a Scottish wildcat breeding program you can go and see (from a safe distance of course) and more.

Also, it’s surprisingly affordable, considering everything on offer! We’re absolutely desperate to return as soon as we can.

Our first adventure from the cottage, was to catch a train on the West Highland Railway Line from Glenfinnan to Fort William aka the route of the Harry Potter train. I researched this thoroughly in advance and was initially upset to realise that the Jacobite Steam train runs a lot less frequently outside of peak months, and we would not be able to be in the right place at the right time, in order to catch it.

However, normal trains still run on that route and so it’s still possible to take a train which goes over the famous Glenfinnan Viaduct (my aim), which in itself is very special. Especially seeing as the normal train was £10 return each, as opposed to £43 return on the steam train. Of course, if we had been able to catch the ‘Harry Potter’ train, we would have jumped at the chance – my mum went on it a couple of years ago and absolutely raved about it. I can’t complain about saving a bit of money though!

Nonetheless, we were still excited to catch the train from Glenfinnan, so got up bright and early to make the beautiful drive going past Loch Ness and across the Stunning Highland countryside, to get the train. In fact, we left even earlier than necessary to give ourselves the option to stop if we saw anything we wanted to get out and look out – it was October, so the autumn leaves were out in force and it’s always a shame on a road trip to only be able to drive past things, so I was pleased to be able to stop a couple of times.

My favourite stop off was when we came across the ‘Bridge of Oich’ near Invergarry, which is free to park at and walk across. Scotland is a bit magical like this – you never know what’s going to be around the next corner.

We arrived at the station about 20 minutes before it was due to arrive, so had a wander around the museum which is in the train station and looked at the accommodation on site: ‘The Sleeping Car’ – it’s housed in an old train carriage, which is pretty cool. (I had tried to book a room here but sadly they were all booked up).

Now, I would love to say that the usual train was just as good as the steam train and I would highly recommend it to save some money etc. But unfortunately, I can’t really say that – the windows on the train were really dirty and I didn’t really manage to see much out the window/take any particularly good pictures.

Here for example, is an image I managed to take of the viaduct (I know, it’s awful):

If you simply want to go on this route, then yes I would definitely recommend taking this train but if you want a real experience, I wouldn’t go for this one – it really is just a normal train, not built as a tourist attraction and the carriages reflect this. Don’t get me wrong, I didn’t think the trains would be any different, but I think I forgot how dirty train windows often are!

The other thing to consider with this train, is the timetables, as they are much less regular than trains in the rest of the country. I had thought about this ahead of time, fortunately – we could have stopped in Mallaig at the end of the line instead of Fort William, but I was aware there’s a lot more going on in Fort William so at least we had an hour of wandering along the high street and could get some food before getting our return train to Glenfinnan.

Thankfully, this wasn’t our only plan for the day – Glenfinnan is only 30 minutes away from the stunning Glencoe, so this was our next destination. You would probably recognise Glencoe from a few famous movies, including James Bond ‘Skyfall’, Monty Python and Braveheart. It’s a beautiful valley and well worth stopping by if you’re able to.

On the way, we stopped and had a quick look at the viaduct from the ground and even saw a deer wandering around! We couldn’t stay for too long though as the car parks where you can get this view are quite expensive and it didn’t seem worth the money seeing as we had just been on the train.

Now, this day already hadn’t quite gone as planned for me, as I had been so excited to get a good view of the viaduct from the train (that I had been planning for a long time). So you can imagine my heart sinking even further when by the time we got off the train and drove to Glencoe, the rain started. Rain so heavy that there was practically zero visibility , so once in the valley I also couldn’t really see anything.

Like true Brits, we took the only natural next step in order to make ourselves feel better – we went to the pub. There aren’t a lot within the area, but the Clachaig Inn is situated within Glencoe, so we stopped there for a pint and some food. And you know what? It completely turned the day around.

The Clachaig Inn is a a bed and breakfast with some bars attached – we went into the ‘Boots Bar’; a cosy little pub with a nice fire and good food, that’s quite popular with walkers due to its location and also in turn, dogs. They have a great selection of local beers that they’re happy to talk you through/let you try and in general, the staff are very friendly.

We stayed there for a few hours hoping to let the rain pass, although according to the staff it hadn’t stopped raining in about a month so that seemed unlikely! Nonetheless, we spent a lovely couple of hours in the warm, tucked away from the rain playing board games and drinking local beers (only a half for me as I was driving, of course).

I think if we ever do another road trip going up the west side of Scotland, I think we would potentially aim to stay at the Clachaig Inn, partly due to its location but also just because of how welcoming and lovely everyone was. Plus they allow dogs!

Once we left, the rain had pretty much passed and so we were able to drive up the valley to gawk at how pretty it was for a bit. I mean, you can completely see why it’s so regularly featured as a backdrop in movies! 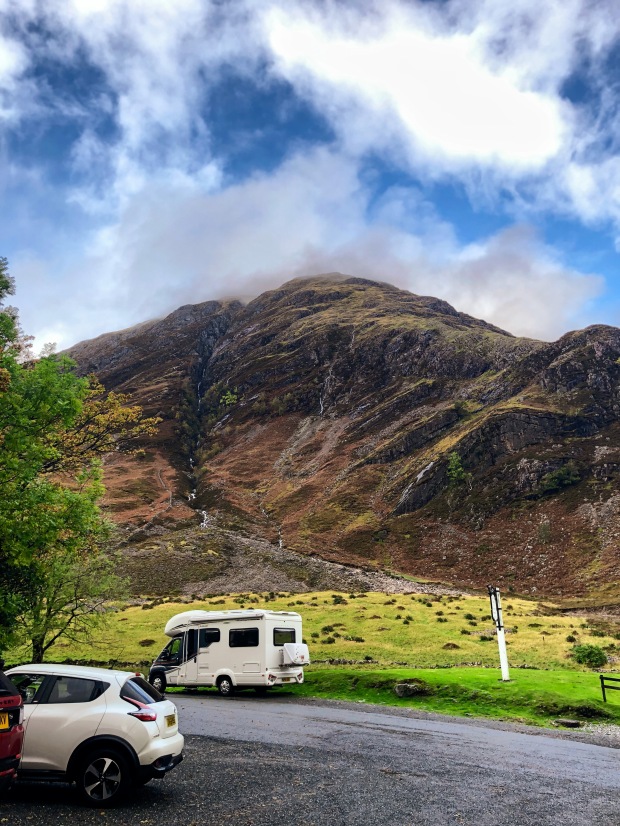 It did take a few hours to drive from Balnagown to Glencoe, so we headed back early afternoon and I will admit, it was a bit of a depressing drive as the rain started again but thankfully we had our homely accommodation to look forward to arriving at.

On the way, we popped into Aldi and grabbed some beers, as well as some food for dinner/the next day and then spent a cosy evening in the cottage/playing games in the games room on site!

And that was the second leg of the journey! The final section, is our travels from Inverness to John O’Groats which was also pretty special.

I posted some top tips on how to travel on a budget in the UK on the last post (which you can see here) but just to reiterate some in relation to this day specifically: