Our second day, somehow, was even hotter than the first. We got up nice and early, put our shorts on and headed up to the Sacre Coeur (well, we got the metro most of the way but you get me) before visiting the Pompidou and then jumping on a train to Tours…

En route, a jazz band played on a street corner, people sat outside cafes and drank coffees… It was a proper Sunday morning atmosphere and we soaked it all in. 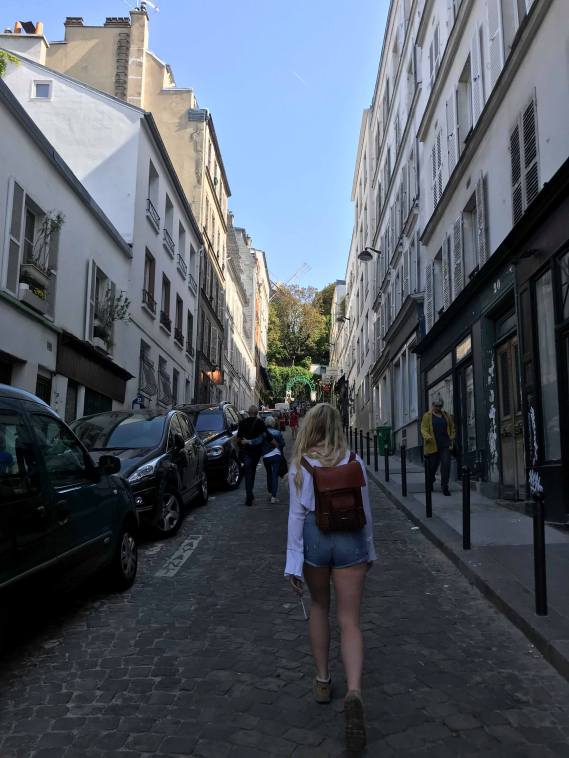 We walked round the back of Montmartre, through Place du Tertre (the artsy square full of people selling and making art) round to the Sacre Coeur and it was delightful. Once we got round the front though, it was slightly less atmospheric and slightly more busy/crowded/overwhelming/where the hell did all these people come from and why haven’t they learnt to walk normally without walking into others. Aside from that, its a gorgeous Basilica and the view over spectacular is lovely – don’t be put off by all the people, its still worth going.

You can of course go inside the Sacre Coeur and indeed up it but it was so busy we decided to wander down the front and hop on the metro back to the Marais where we were staying, to visit the Pompidou. The metro is super cheap by the way, in comparison to London, anyway. I recommend getting a Carnet/book of tickets and then its only €1.49 per ticket.

The first sunday of every month it is free to go inside so aside from the metro tickets we managed not to spend anything, which you can’t moan about. Also, I assumed it would be ridiculously busy due to it being a free open day and all, but in comparison to where we had just been it was practically empty. Its about as busy as the Tate Modern would be on any given day, really. 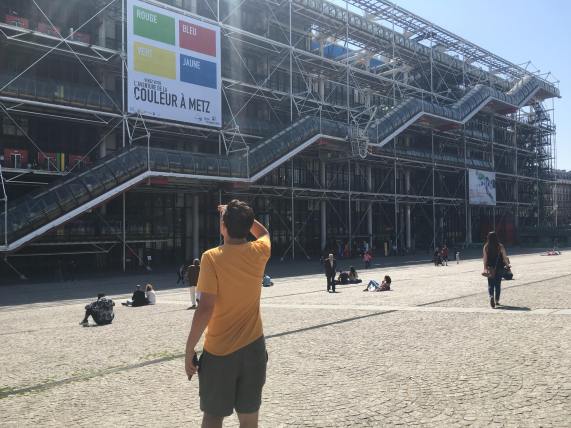 If you’ve not been, the Pompidou is a super cool modern art gallery that I highly recommend visiting whether or not its free – if you’re under 25, I’m pretty sure you don’t have to pay anyway, as with quite a few things in Paris (the Louvre, for example). There’s always crazy stuff to see at the Pompidou and you can easily spend hours and hours wandering. Even if you don’t go inside (which you should) the escalators on the outside are pretty cool to look at – it always makes me think of pictures of it from my old French textbook from school.

Unfortunately we had a train to Tours that we needed to catch, so had to meander out after an hour or so. We did still manage to walk round most of it, plus sit on the balcony in the sunshine for a bit, and I of course managed to get told off (for not wearing my backpack on my front. Simple art gallery 101.)

My parents had got the Eurostar from London that day and were meant to be arriving in Tours an hour earlier than us. We arrived at the station in plenty of time at which point my mum text me to say they had already been sat on their train for 15 minutes, going nowhere. As time went by it became apparent that they weren’t going anywhere quickly. Amazingly, this was nothing to do with the French train strikes, it was just bad luck as another train that was ahead of them on their platform broke down and got stuck.

We, however, got on our train and it left almost dead on time, then my parents followed shortly. I recognise this isn’t a key piece of information if you’re planning on taking the train to Tours but the take away from that for me would be, always leave way, way too much time for public transport because you never know what might happen.

When the train got going, it took a couple of hours and the journey was nice (considering it only cost about 15 euros, which is pretty decent. It costs double in England that for a 30 minute train to just outside London at peak times.) We all ended up arriving at around the same time in the end, so jumped in the same cab to our hotel together which worked out well. We stayed at Hotel Oceania L’Univers, Tours and I must say, its a pretty damn nice hotel. There’s even a pool/sauna/jacuzzi which was empty of people when Fred (my boyfriend) and I went down after having dinner/drinks next door in the sunshine. This was lucky because well, I embarrassingly fell asleep by the pool. And then again almost as soon as we got to the room. I think Fred watched snooker on TV.

I WAS TIRED FROM ALL THE RELAXING, OK.

I visited Tours on a school exchange when I was about 15 and remembered barely any of it, so was excited to see it again. I of course stayed with a French family, not in a fancy hotel, the first time I went so it was a slightly different experience.

The next day we had a wander round the city centre, which I will get into on the next post….