After a few stressful days of drinking, walking in beautiful countryside and meandering around lovely cities, we really needed a break and some time to relax; to just get away from it all. So we headed to Parnu, where we had booked a spa resort hotel.

I jest. We genuinely had booked a 4 star spa hotel but not because we were too stressed from driving around Latvia and Estonia. This was just the cherry on top before we had to return to work and boy, I’m so glad we did.

Of course, we could have stayed an extra day in Tallinn however that would have made the drive down to Riga the next day to drop the car off/fly back way, way longer. If you don’t like spas but you wanted to recreate this trip that would of course be an option but I would really recommend doing what we did nonetheless. I mean, spas are pretty great and these one are actually affordable.

Nowhere we stayed in Estonia/Latvia was expensive – it was £68 altogether for the night (a Friday night) in the Estonia Resort and Spa hotel, which included breakfast and access to the swimming pool/gym/spa area (which comprised of a bunch of jacuzzis/steam rooms/saunas including a salt room which was absolute bliss). There was even a bar inside the spa.

I didn’t take any pictures inside the spa because I didn’t have my phone. Also it would have been a bit weird. So you’ll just have to take my word for it that it was nice.

There was one thing that took me by surprise though, which might be completely normal to everyone else… Which was that there were loads of kids there. I didn’t have a problem with their presence, I quite like kids, plus they were very little and so didn’t run around causing mischief. What I found strange was how they weren’t just in the pool area but parents took them in the steam rooms and saunas too; tiny little babies laid out in a boiling hot room doesn’t seem like it would be that good for them. They did have a mild 40 degree one with kids TV on and some toys in that made sense to me but personally I wouldn’t bring a baby in to a steam room. In fairness, I don’t have a baby. But also if I did, I probably wouldn’t bring it to a spa in the first place because it takes away from your relaxation a bit.

Anyway, what do I know? We accidentally laid in a foot bath at one point. I won’t go into detail but that did genuinely happen.

As well as the spa, we did have some treatments done – we emailed the night before hoping for 60/90 minute massages but they didn’t have time slots that long available, so we opted for 30 minute massages which actually worked out perfectly. They had a variety of options available, ranging from honey to Swedish to peat. Hamilton went with honey and I just had a classic one, during which she asked if I did a lot of shoulder exercises. Not because of my sculpted shoulders though, apparently. I’m quite tense up there.

If you are after a longer treatment/more, then its definitely a good idea to book further in advance.

In all honesty we picked Parnu because it made sense geographically and because of the spas but the city itself is also rather lovely.

We ate pizza before we went into the spa at a local restaurant (Steffani Pizzarestoran – highly recommend it) and were full for the rest of the evening. We didn’t have breakfast out as it was included at our hotel but I would happily have had pizza again. I did actually have some left over. Not that the breakfast was bad though.

As we had found at all of the buffet breakfasts in various hotels in Estonia/Latvia, there was a real mix of foods. Always good food but a big old mix. Including a few bottles of champagne because why the hell not.

After breakfast, we walked down to the beach which was practically opposite the hotel – you know, why not? It was April, the weather is warming up by then right? Wrong. The sea was literally frozen. The snow we experienced the day before probably should have tipped me off a bit. Thankfully we weren’t in our bikinis and hadn’t expected to go for a dip, so the frozen sea was actually pretty darn cool. Its not something I had ever seen before and it didn’t quite feel real.

The beach was pretty though and I imagine its lovely in summer, and probably a bit more fluid. 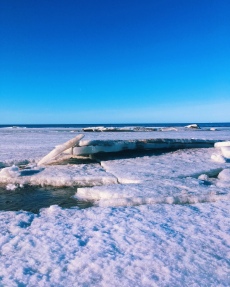 Once we were done exploring, it was time to get back on the road to head back to our original destination – Riga, where we stayed in the most amazing hotel yet. Which I will get into for the next post.