Considering its only a 45 minute plane ride away and a good friend of mine lives there its pretty much a travesty that I hadn’t visited Amsterdam since 2015. Though judging by the title of this post, you’ve probably figured out that I finally managed to return to the land of cheese and beer…

Last weekend my boyfriend Fred and I visited my good friend Karolina and her boyfriend Menno in Amersfoort. Its a 30 minute train ride from Amsterdam and truly GORGEOUS. Cobbled streets, charming squares and cheap beer… She was moving in with her boyfriend so kindly let us have her flat for the weekend, an offer we are very, very grateful for. (Thanks again, Karolina!)

We arrived super late on Friday night after work and it was lucky that Karolina kindly picked us up from the airport because the train station was shut, which would have been a bit of a nightmare. We made it back to her place and then headed back out for a beer… Which cost €2, so turned into 4 beers…

Suffice to say we didn’t wake up as bright and early as I thought we might of. On Saturday we got up mid morning, grabbed some pastries and headed into Amsterdam. Karolina had given us so many amazing recommendations it was hard to choose where to go.

I had booked for us to go to the Banksy exhibit the next day and seeing as it is located near to the other museums (Van Gogh Museum, Rijksmuseum, Stedelijk Musueum), we decided it made sense to have a chilled out Saturday and wander round some of the other places on our long list of want-to-sees.

We were already kind of headed in this direction from the station – its only a 10 minute walk from there, so wandered around this area. Its full to the brim of old and new independent shops and basically a nice place to walk around. It was a lot quieter and less touristy than some of the other areas, especially near the station, so it was nice to explore. 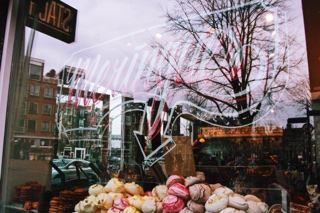 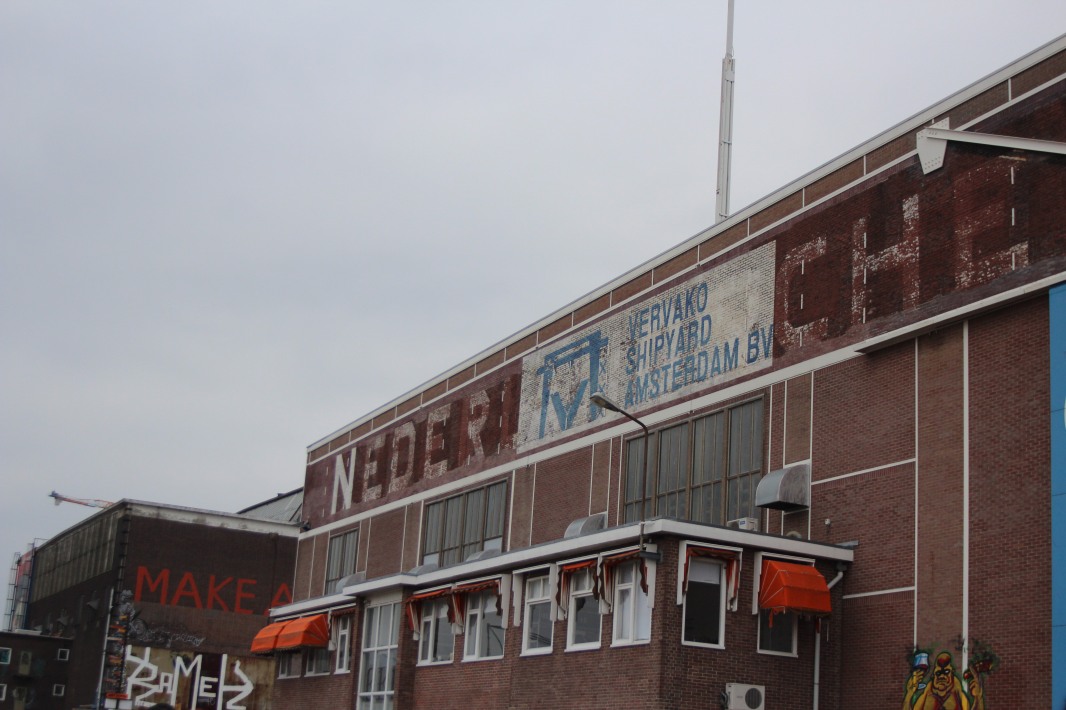 After slowly making our way down Haarlemmerstraat and staring into shop windows we took the short (and very pleasant) walk one of the many free ferries that takes you across the river. We got on one going to ‘NDSM Wharf’ (Nederlandsche Dok en Scheepsbouw Maatschappij), which is an old shipyard repurposed as a hang out area with bars, restaurants and venues. One place immediately caught our eye; ‘Sexyland’. In all honesty, we had no clue what it was at first, but its very easy to be drawn into a big neon sign with such an intriguing name. I know we were in Amsterdam but fyi turns out it was a music venue. We still did not go inside.

We didn’t really know where to go to be honest – lots of people got off the boat and then we kind of lost track of them. It seemed slightly apocalyptic. We wandered around a car park looking for signs of life and a guy shouted after us to ask what we were looking for… We didn’t really have an answer for him, so he pointed us in the way of a cafe across the other side of the car park inside some shipping containers. For some reason we blindly trusted his direction – not always a great idea to do so from strangers in a car park that want you to get into a shipping container but thankfully it paid off.

We walked through some random shutters and suddenly found ourselves in a crowded cafe called Pllek. The vibe was super chill and nice; big sofas, a huge window and they even have a man made beach (can’t say I would recommend sitting on it outside of summer, but still, it exists). I’m not 100% sure if you’re supposed to be seated or not but there wasn’t a line when we arrived so we sat down at a table in the middle and I went off to grab beers. By the time I sat back down there were loads of people waiting for tables on one side of the restaurant – I think we must have just missed the rush because when I googled the place, it said there’s normally a 30 minute waiting time. That or the queue was there and we didn’t notice, we will never know.

Pleased with our successful yet accidental queue skipping, we ordered food and my my, was it good. I had poached eggs on toast with spinach and mushrooms and they were sublime. I don’t know what it was about them but I would happily eat it again and again. Often when people make poached eggs they’re quite bland – I’m not exactly sure what was in these ones but flavour was a highlight. The cost was also pleasing.

We chilled out there for a bit, discussing how we would decorate the place internally if we lived there. Then paid the bill and had a look outside – the sun had come out and it turned into a lovely day. People were even mooring their boats at the end and coming inside. 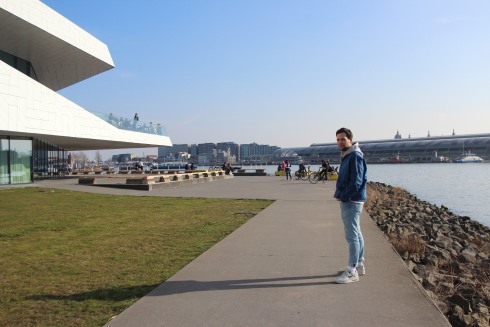 Next stop, was the EYE film museum. It is a 30 minute walk from where we were so not too bad (unless your boots are rubbing like mine were, in which case you are entitled to whinge most of the way there, even if your boyfriend would rather you didn’t). When we got to the museum the sun had really come out and it seemed too nice to go inside, so we chilled out by the water’s edge and watched the world go by.

The building itself is a sight to see, so we weren’t too fussed about not seeing it from the inside. Plus, we figured we wouldn’t necessarily know all that much about Dutch cinema, so we weren’t missing out that much. When we’d out people-watched ourselves we got back on another free ferry to Amsterdam and meandered round the canals, which was super nice. Somehow we managed to spend most of the day away from the crowds, which made it very peaceful and calm.

We got beers in a little pub by a canal and watched the world go by a little more before getting on a train back to Amersfoort, where Karolina had booked us all a table for dinner. Fred had heard Indonesian food was really good there so we went to a place called Sally’s Indonesian Kitchen.

You know what?  He was right; the food was good. The people were nice too – giving us special menus for us idiots that shamefully do not speak Dutch. We actually got congratulated at the end for being able to handle the spices, even though our British tummies are used to Indian spices. I hadn’t thought about it while eating it but I’ll never turn down some appreciation for a task I enjoy, so yeh, we did pretty well at eating the nice food. Go us.

According to my phone, we walked 7.5 miles that day so after dinner had a well deserved lay down and early night, ready for the 8.7 miles we ended up walking the next day…