With a slight scent of horses still about us, we grabbed a cab (much to the surprise of our hotel reception) up to Lake Louise from Banff, which was more hair raising than expected…

So, apparently it’s rare for people to take a taxi from Banff to Lake Louise. I’m still not 100 percent sure why, as it’s only a 40 minute journey… But yeh, I guess, if you’re going and want to avoid perplexed reception staff then a bus is the way to go.

Saying that, however, I doubt with a bus you’d get the experience we had… A taxi driver that knew all the ins and outs of the area, who was happy to take us the scenic route at the same price of the highway, whilst telling us tales the entire way. In fact, he was in the middle of telling us about how a Grizzly Bear known as ‘Number 136’ famously ate a smaller grizzly bear, when we drove RIGHT PAST HIM (Hastily, I may add). We didn’t have time to snap a picture, as we were too busy picking our jaws up off the ground, but nonetheless we did see him. Spoiler alert: he is MASSIVE. And not to be contended with.

There are a lot of bears in the area, but definitely do not let this put you off visiting. They very, very rarely wander into town, and when they do the Park Rangers very swiftly herd them out of town again. People don’t want the bears about, and bears don’t really want people about. So it works both ways. In fact, this was our only bear sighting during the rest of our time in Lake Louise.

The hike up to Lake Louise

Once we got up to our hotel (The Lake Louise Inn), it was fairly late, so we grabbed some snacks and retired to bed, ready for an early wake up call and a hot meal, before starting our hike.

The next day, we got breakfast in the hotel (pancakes for me, of course) and started our little trek. It was quite busy around the village as it was the last day of ski season, and people were preparing for a party. We did consider joining them, but since were only there for one day, it made more sense to do what we had originally intended, and walk up to the lake.

The weather was mild; cold, but not too cold. My mum and I both had thick jackets and jumpers on, but then just a pair of leggings (3/4 length in my case) on the bottom, with our hiking boots. We expected a little jaunt, up a fairly steep hill, but nothing we weren’t used to.

… It was a little different than we expected, to say the least.

Just because there was no snow in the village, this 100% does not rule out snow elsewhere. In shaded areas, and in higher elevations for example. We did not think of this.

After about 15 minutes of walking, we saw our first patch of snow. It was exciting; we hadn’t had much snow in England this year. What a novelty.

This fun did not last long, as the entire path became snow. At one point, I took a step and was easily thigh deep in snow… Oh, how my mum laughed at me. I mean, it was pretty funny. Especially as two seconds after I did it, she did too. 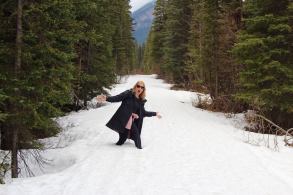 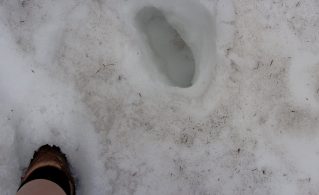 All very funny, until every single step left you thigh deep in snow. After 30 minutes of that, it becomes a little less hilarious, and a little more wearing.

Nonetheless, we made it to the top, and boy am I glad we did. It was a struggle, but genuinely so worth it. Probably, all the more worth it having trudged through the woods to get there. It’s absolutely beautiful, and honestly doesn’t look real at first glance.

I can’t quite say the same for the swarms of people that were milling about at the top though; judging by the car park we walked through, presumably 99 percent of them came by coach. No snowy fun for them.

It was super strange seeing that many people after coming across roughly zero people for the last hour or so, and I will admit, quite frustrating. One minute, you’re the only person in a deserted, pleasantly silent woods, the next you’re struggling to walk along the path as other people are blocking it up.

We rallied on though, and decided to take the path around the lake; if it was later on in summer, I would have loved to have gone up to one of the Tea Houses that you can hike up to, but it was late April at the time and sadly they were yet to open. 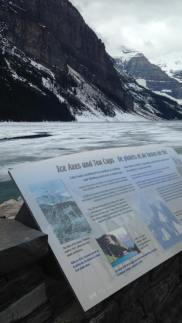 The walk got nicer the further along the path we got though, and due to the cold, we were even able to walk down to the end of the lake and onto the lake bed, where we could see the whole way across to the chateau.

We’d brought with us a flask, and some tea (we’re British, after all), so we took some time to enjoy the view and then walked back to the Fairmont Chateau for some proper food. It was absolutely packed full of people of course (I can’t imagine what it’s like in high season), as even if you aren’t a guest you are allowed to go into certain areas. The proper restaurants were all quite busy, and ridiculously expensive, so we made our way round to the deli where they had really good food, served by lovely people, at an actual normal price.

Just what we were after. 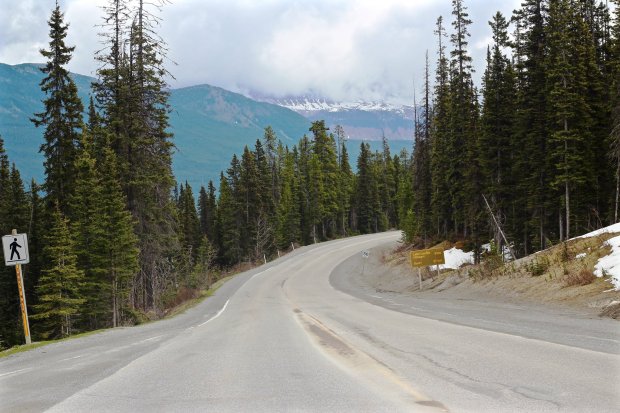 Once we’d had our fill, we tried to organise getting our slightly cold selves into an automobile for the journey back. Turns out, this isn’t that easy. So instead, we did what we knew best, and walked.

Again, we were the only people around… Until we heard some recognisable voices. Other British people! Amazingly, the only other people stupid enough to walk back down from the lake to the village were other Brits. Surprisingly they weren’t from that far from my home town either. It really is such a small world.

Once down in the village our stomachs were rumbling again, so we went into the supermarket, grabbed some food and returned to our hotel room for a hot bath, plus all the chocolate, where we settled in for an early night, ready for our very early morning…

As the next day, we were boarding the actual real life ROCKY MOUNTAINEER.