Our two final nights were spent in the unique and charming city of Edinburgh. 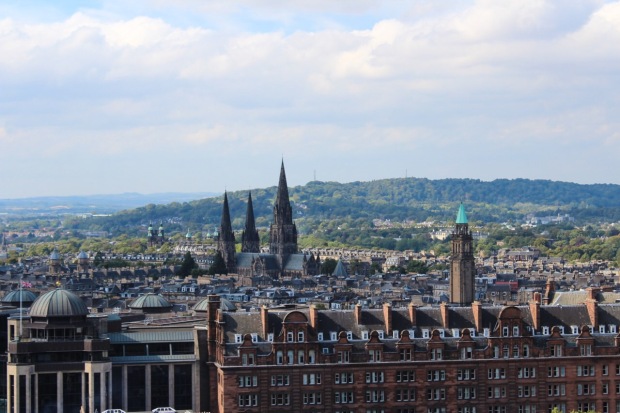 I’d always wanted to go and in all honesty had no idea how to go about planning our time there. The rest of our road trip in Scotland was mostly spent in rural areas, so I knew a city would be a bit of a shock to the system and didn’t know how much we’d want to do.

I went to Sussex University, in Brighton and visited there 2/3 times before living there, and it wasn’t until being an actual Brightonian that I saw the Brighton everyone had been going on about. So I was a bit worried I’d miss out on Edinburgh’s charm in the short space of time we had…

I had nothing to worry about. It hit me from the moment we got there. This may have been because of the beautiful sunshine, or my pure joy at seeing actual proper shops instead of millions of sheep. (I love the countryside, but sometimes it’s nice to be able to just walk out your front door and actually be somewhere)

The first night we got there it was already late due to the time it took to drive down from John O’Groats, so we just grabbed dinner from an Italian restaurant round the corner and called it a night. The next day we got up, went to Loudons Cafe which was a couple of streets from us (It’s like, the best. Go and eat stuff there if you can) and then carried on walking to Edinburgh Castle.

There are a lot of positives to the castle, for one, it’s a castle. And they’re always fun places. Two, it’s beautiful, there’s a lot going on inside aka things to look at and it has a great history. Sadly, a lot of people know that. And the major downside to it was that there were about a billion people there. Any time you stop to look at anything, people… People everywhere. Even though in my opinion the entrance price is pretty damn steep, which you’d think would put some people off.

Whilst we were there we walked around pretty much the whole thing, went to the National War Museum (It’s inside) and then went to see the Crown Jewels, both of which were really good. Though reminded me how much I didn’t know about the British Monarchy.

Similar to Tower Bridge, the Crown Jewels kept in a special room that people seem to love queueing for. Fun tip, if you walk up the stair case round the corner from the massive queue you can see an interesting exhibition about them, and then go into the room without queueing at all. We felt very smug. Also, unlike the English Crown Jewels you aren’t made to stand on an escalator when you see them, so you can actually take your time to look.

Also in the room with the jewels, (if they’re not amazing enough for you) is the Stone of Destiny. Which has an interesting history all by itself. Yes, it’s a stone. But it’s not just a stone – it’s considered a holy relic and has been fought over for hundreds of years. For a while the English kept it under their coronation chair, until on Christmas Day it was stolen, then left at Arbroath Abbey in Scotland, before being taken by the police back to Edinburgh where it is to this day. I’m not 100% about the legends that go with the stone, but I do really enjoy that it isn’t any kind of jewel or precious metal, it literally looks like a big stone.

Anyway, after that, we went to the Camera Obscura which is right next to the Castle. It’s not the obvious thing to do out of all the attractions in Edinburgh, I’ll give you that, but it was a bit of fun – it’s sort of a fun house on the way up, with a mirror maze and a tunnel that makes you feel like the room is spinning, and then at the top is the Camera Obscura.

A Camera Obscura is a room at the top of a tower that has a hole in it and a mirror, basically. It allows you to see all around the tower, as though you’re looking at a live stream. Whilst in there, you’re given a ‘tour’ of Edinburgh, without having to walk around. It was actually really interesting and well done. I’d definitely go to another one. When you leave the room, there’s the added bonus of being able to see the view of the city without the use of a mirror.

This meant that when we left the building, we actually had an idea of where we were going.

We then went to the National Museum of Scotland. Parts of it were closed, like the bits with the planes in. Ngl, I am easily impressed by a plane in a room. I think it’s the sheer scale.

The museum is free, and a really good visitor attraction. We were there for a good hour/two hours but you could spend all day there. It’s very interactive and has lots of videos/exhibits to keep all ages entertained. There’s also a really good view from the roof.

We spent the rest of the day wandering around, listening to bagpipes and looking at Tartan. I also found an amazing art shop, called The Red Door Gallery. I am a bit obsessed with prints and probably shouldn’t have been allowed in the shop, but I managed to only buy three postcard sized prints and one full sized one. Which is lucky as my walls are getting a bit full anyway!

They sell prints, homeware, jewellery etc made by local and new artists, all for a damn good price. If I had more walls, their prints would cover them.

It’s so easy to walk around the city centre there, so I feel like we saw a fair amount of it in the time we were there, but I loved all of it. I would honestly move there in an instant if there was a job going. It really reminded me of Brighton, in the mix of people and neighbourhoods – two streets apart from each other have such different vibes, but generally always good.

I definitely want to go back for a longer period of time – there is a hell of a lot more to do there than we did. The Fringe of course, is a must do. I used to work for the Brighton Fringe and that’s where acts tend to go before heading up to Edinburgh, a a practice almost and that was fab, so I can only imagine what the Edinburgh Fringe is like.

For dinner we went to Shebeen, a South African bar/restaurant, which gave me a million more reasons to want to move there. It’s really, really good. It makes me hungry thinking about it. If they’re ever thinking of branching out, Buckinghamshire would love to accommodate them. If they could bring their staff, prices and atmosphere too that would be grand.

So, yeh, that was our trip. I think we did pretty well in seeing the amount of Scotland we did in the time – you know what, I wouldn’t change a second of it. Even though the bridges were against us.

Our next adventure is happening very soon, so I’m going to go and do some more planning…

For now, Happy Travels and of course, Happy Monday.

One thought on “END OF THE ROAD | EDINBURGH | SCOTTISH ROAD TRIP”