I lived in Toronto for a little while, meaning I had the chance to try out a few different bars around the city. Ok, well mostly near me (Queen West). Of course, I am well aware that there are hundreds of bars in Toronto and I only had time to sample a selection of those, nonetheless out of the ones I have been to, these are a few that I enjoyed and would be happy to recommend to others… And return to myself.

Great for: A trendy Thursday night

I really like The Drake as a chain in general – yes, it’s slightly pricey and very knowing of its vibe but you know what, it is cool and they know what they’re doing. They have good beers, the music is good and the decor is spot on. There are a few different ‘Drake’s’ around the city; they all vary slightly but are pretty similar generally. As well as bars/restaurants/the hotel, they have stores which sell really nice, well thought out Toronto merch which make for good gifts if you don’t mind spending a bit more.

Great for: A grown up jazz night getting drunk on whiskey

The Rex Hotel is a jazz/blues institution in Toronto and one of the most chill evenings I have ever had. I can only describe walking in, as like walking into your home or at least that’s how it felt for me. It’s cozy but large enough that you have space to sit down (most of the time). Plus, they have different jazz performances on every night, just check the calendar to see what’s on.

Ok, this one is very festive season specific and not relevant if you’re reading it outside of this time because it won’t actually exist. This year it opens on November 25th (through until December 26th) but it’s in a different location.

Last year it was on Queen West: entering felt like a speakeasy – its a smaller door that lead to a staircase – walking up to the top floor, it was crazy busy with people getting merry, in the name of Christmas… That’s right, a Christmas themed bar. From the pictures, we assumed it would be tacky inside but honestly, it was super lovely. It’s cozy, cute and very friendly. I mean, the bill is less friendly but you’re paying for the experience (and some pics for Instagram). It was busy in there but they seated us as quickly as they could and didn’t try to rush us out, so we stayed for over an hour with one drink and a plate of Christmas cookies.

Great for: A chill night

It’s preferable to come here in summer, I won’t lie – it’s got a good little outside space and there’s lots going on around you making it good for people watching. In general though, it is such a nice place to hang out. It isn’t too pricey (I mean it isn’t a dive bar but it isn’t mad money either), it’s small but perfectly formed inside and I guess I would sum it up as a local. It’s not so much of an experience as the other places but it’s a nice place to drink that isn’t dingy. 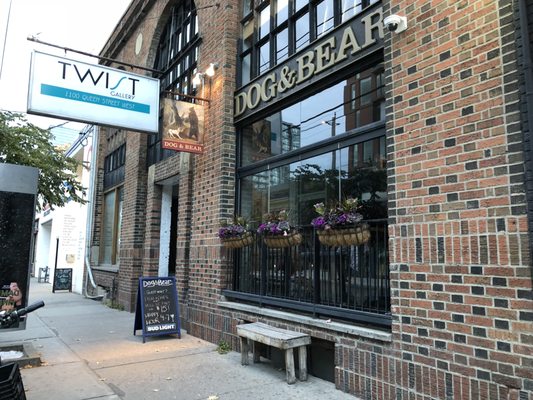 As a Brit in a foreign country, in most ways it is nice to explore local Canadian places and delve into foreign cultures but also, it can be nice to see a piece of home. I was lucky enough to have this British pub a stones throw from where I lived and I must say, it was nice. It’s quite a big, open pub with a lot of booths, TVs on playing sports and classics sports pub food at a decent price. Things do liven up later on but in general its a fun place to watch sports on TV (Baseball, soccer, ice hockey, you name it) and chat with friends.

I found out about this place when I was out with a friend and he asked some people in a bar for their recommendations. They said this place and when I looked it up on google, I was sure he had the wrong place… Because all the pictures are of a restaurant.

That’s because this is hidden behind a facade of an Asian restaurant – you walk behind the counter and boom, you’re downstairs in a huge space absolutely full of people. I found it a bit strange when I went in, not because I thought it was a food place but because there was super loud music and no one was dancing. That was the only negative I can find and this was late on a Friday night, so I wouldn’t say its surprising that there was loud music. It’s a really cool venue and somewhere a bit different to go for a drink.

Ugh, this place is awesome. It’s spacious, full of arcade games and home to a Brooklyn pizza place at the back. FYI the games are free, too. Midweek there are plenty of tables, the music isn’t loud and the service was quick. On the weekends, its much busier and the music is loud af – but that’s what you’d probably want, right? They have loads of good beers and its not mega expensive. I miss it hugely.

Great for: People that like beer and bohemian industrial decor

I guess this place is less of a straight up bar and more a restaurant because it serves really good food but you can just go here for a drink if you want. Based on the name you’ve probably figured that yes, it is a brewery – they make their own beer, including a strange but actually very pleasant lactose beer. I still don’t properly understand what its made of but I did drink it and I did enjoy it. You can also buy bottles of their beer and merch in their bottle shop next door. They’ll put it in a little carry box for you too, so you don’t sound like an alcoholic with beers rattling around your bag (come on, we’ve all been there).

Great for: Casual people that wanna act a bit fancy

WE OUT HERE! 🤘🤘🤘OPEN tonight till 2am #longweekend #happyhour #dinner #drinks #latenifht

This one is sort of another speakeasy but not really – you can see it from Queen West, you just have to walk down a slightly dodgy looking alleyway with a large neon sign at the end to get to it. Once inside, it’s quite small but super luxe and personal. They’ll do their best to find seats for you and then they make absolutely delightful (and actually not too pricey) drinks.

Great for: People who love the 80s and posing for Insta

I had seen pictures of people on Instagram stood in front of these damn phones for months, somehow missing that I walked past the bar they were in almost every day. It’s quite unassuming, looking more like a comic book store/corner shop than bar but once you walk in, it’s cool af.

Then once you walk downstairs, you’re presented with these fun phones you can pose with. Only thing though… There’s a slight catch. A lot of the time, unbeknownst to the people taking photos to their heart’s content, a camera is live streaming all of that to the bar upstairs so everyone can watch and make fun of the ridiculous stuff they’re doing.

But if (like me) you’re brave enough to withstand the potential ribbing, it’s a laugh.

Again, this isn’t a comprehensive list – just places I remember fondly and would recommend to anyone I liked that was visiting. I visited a bunch more bars than this – The Gladstone is good, Otto’s Bierhalle is also great, the Queen Street warehouse is sticky but kind of fun… There’s genuinely a bar for everyone there.

And if you don’t like bars… Well then why are you reading this?