I’ve been to Chicago, New York, Washington DC, Nashville… Basically a bunch of US cities in the east, but until this road trip I had never made it to Boston. It’s been on my list for a while so I was very excited to finally go.

This may seem like a bit of a no brainer but it’s truly lovely. It’s a gorgeous architectural mix of old and new buildings, with a real historical charm that draws in all different kinds of visitors.

We decided to make Boston the focal point of our road trip mostly because we hadn’t spent any time in this area and it was helpful to have an end goal to work back to Toronto from. It seemed quite far from our origin (which in fairness, it was) but it was definitely worth it to see the city.

Of course, not everyone will be starting off from Toronto, in fact I imagine if I was to do a fall road trip from anywhere it would probably make sense to start it out from Boston.

My favourite parts of Boston were for sure, Beacon Hill and Harvard – both were really pretty and calm to walk around. Beacon Hill was also a great place for my road trip buddy Hamilton, and I, to get into our favourite pastime – guessing how much houses cost… In Boston, they’re all about triple what you think they might be. I mean, my goodness.

If I was to go back, I would love to explore the museums and take a trip to the Boston Public Library, which I’ve heard is spectacular inside. 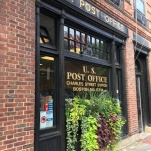 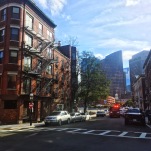 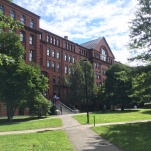 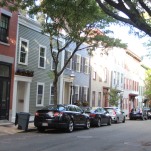 Much easier to drive than to spell.

It goes through the White Mountains National Forest and is a beautiful, easy drive with lots of places to stop off. We did our road trip at the start of October which looking back, was far too early but did manage to find the fall foliage we were after on this road.

Basically, the Kancamagus Byway won’t let you down, even if everyone else does.

I wrote about this in an ever so slightly negative tone, simply because I was overwhelmed with the amount of overpriced tourist shops. Saying that, it’s a really nice place and I would happily go again. It’s not necessarily somewhere to stay for weeks on end but its a perfect fall road trip stop off.

One of the things we loved about this Fall Road Trip, was the variety; we saw mountains, beaches, big cities, small towns and everything in between. Portland encompasses all that, as it is an eclectic little city with an artsy vibe – cute cafes, local shops and friendly people. I fell in love with a paper shop there called Gus and Ruby Letterpress (prints are my kryptonite – I just can’t help buying them). 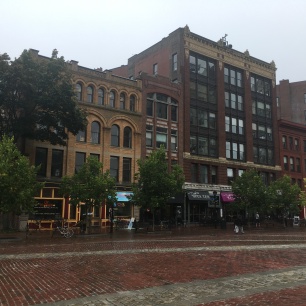 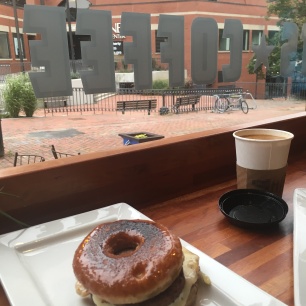 If you’ve ever read an article about the best towns to visit in New England, you will be sick at the sight of me mentioning Woodstock – it is listed almost every single time. Well you know what? It has a right to be – it is a delightful town and if you’re passing through, pull up and have a walk around.

Funnily enough, it was quite expensive to stay there so we only had an hour or so, but I really enjoyed it. There’s lots of lovely gift shops that don’t have the usual tat in (Woodstock is too classy for that), there’s also a few clothing shops and a lot of people walking their dogs.

I’ve just checked the town’s website and there are lots of adorable little events on too, like beekeeping work shops and holiday concerts – check the site before going and you might find something you like the look of! 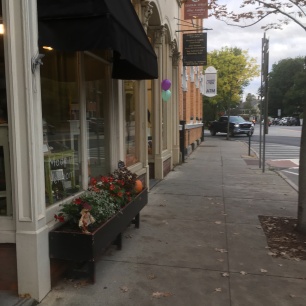 Ok, this isn’t a specific place but honestly New England is chock a block with great antique and thrift shops. In the UK, charity shops are nowhere near as good as the thrift shops out here, so I always get a bit over excited when I see one. We saw them round nearly every corner, so it was a pretty exciting trip for me.

Personally, I prefer thrift shops over antiques because thrift shops are much more fun… You might find a gorgeous old trunk for 50 cent, or you might find an open pack of Tena lady for $1.50 (I have genuinely found both of those things). Antique shops I find look down on people a little bit, as they sell an old can of coca cola for 10 dollars… Yes, I’m sure it’s collectable but some stuff just seems ridiculously pricey. You can still find good stuff in them though, so I wouldn’t avoid them altogether if you like looking at this sort of thing.

The sheer amount of pumpkin/vegetable patches

Again, I don’t have an exact location but they are legitimately everywhere and they are ADORABLE. This may be a very normal American thing but to us Brits, it’s very sweet. Basically, people have little stalls at the end of their driveways selling pumpkins, carrots, potatoes, eggs… Whatever they have produced and then they leave it out there with a price on, and if you want it, you pick some up and leave the money. It’s a trust based system and that’s what I like so much about it.

The closest thing to that we had was a dairy farm round the corner from me in Buckinghamshire having some fridges with milk in… I think most British people were too nervous at the idea of no-one making sure they paid to go inside.

We didn’t actually stop at any of these stalls (hence the lack of pictures) because we had no need for vegetables in our motel rooms but, if I lived near any of these places I would be beside myself with happiness at getting to bring someone a bit of joy, after finding they had bought all 20 pumpkins they left out.

Ok, it’s probably a good thing that I don’t live near any of these places. I definitely don’t have room for 20 pumpkins.

Do you have anywhere else to recommend?