Roadside attractions played a big role in our lust for road-tripping the US of A; at this point, we had already hit up Dinosaur Land and Foamhenge. Neither disappointed.

I didn’t have quite the same faith in the next one, but I was willing to be pleasantly surprised…

Abraham Lincoln’s Birthplace. (Not quite an attraction in the same way as the above, but still a place to visit off the road we were on)

In all honesty, I knew little about what was going on there, but the drive from Nashville to Chicago was the longest one during our trip, and after some research it looked like slim pickings in the way of something to break our journey up a bit.

We could have stopped by Louisville or Indianapolis, but we didn’t really feel like stopping en route in a city. It just takes too long with traffic and parking etc, and without a specific place we wanted to go to, it didn’t make sense. Thus, the birthplace of Abraham Lincoln was entered into our sat nav and we began our long trudge.

The journey was mostly highways, until we got to Kentucky in order to get off for the stop. I must say, it’s absolutely gorgeous. Really green, with picture postcard little houses, and practically empty roads. I may not agree with a lot of Kentucky’s beliefs, but I can’t fault their scenery.

Not going to lie, I expected the lead up to the birthplace to be a grander affair sign wise. I think we saw one sign? That was, until we got there, and realised a whole area of Kentucky is based on the fact that Abraham Lincoln was born somewhere there; every road, village, bus stop, piece of grass… Was named after him.

I’d read about it online, and heard that the birthplace specifically was a beautiful spot. You know what? It is. It’s lovely. We got out the car on a blisteringly hot day, wandered through the trees and ended up at a stone building, reminiscent of the monument erected for Lincoln in Washington. (Minus a stone replica sitting atop the steps) 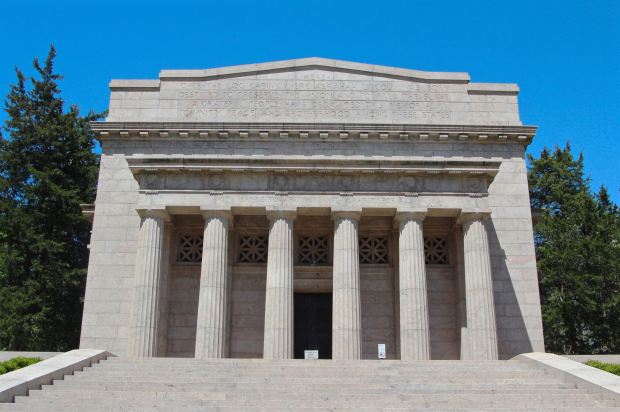 As British people, I think its fair to say that we didn’t know that much about American presidents , aside from what I had been taught in history class (which was pretty minimal) and what I had read about/seen in films. Plus, a random collection of facts picked up from the Smithsonian National Museum of American History.

Basically, I knew he was a very important guy, but I didn’t realise all this existed to prove that. It was pretty cool.

My main comment… It says his birthplace, and all exists because of this. It all gets a bit confusing from here on in; the monument is built on the traditional site of the birthplace. Then WITHIN the monument is a replica of his childhood home. Well, it could contain bits of his original home… They aren’t sure. Apparently it got a bit mixed up with the wood from some other old homes that were being reproduced. 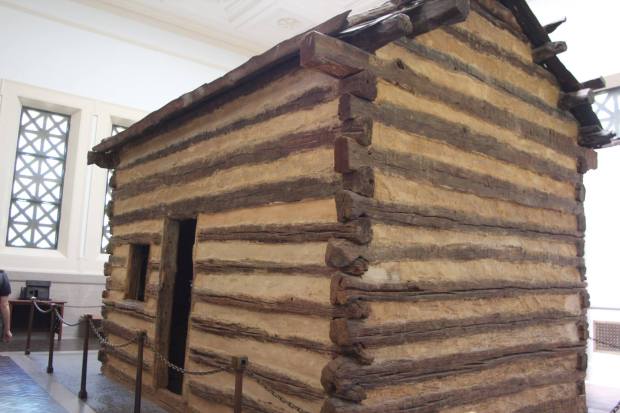 At this point, I really feel the need to point out how amazing the volunteer inside the building was. We didn’t ask for any information, but that guy knew anything and everything about this site, and made sure we did too. I say this with slight sarcasm as we were quite happy without knowing every detail of Lincoln’s life, but genuinely, he was a really nice guy that tried really hard, and must have been bored slightly silly with sitting in that room by himself all day. So thank you, park volunteer. I’m sorry I don’t know your name.

Anyway, you may notice in the above I wrote ‘traditional’ site. This is because it’s simply where people believe it once stood. AKA it might not even be the exact place.

Basically, it’s a pretty building and if you’re in the area, then definitely stop by… Go for a walk, go and see the log cabin within the other building… It’s free, what have you got to lose? You can then go home and tell all your friends about how you might have stood where Abraham Lincoln was born, near a wood cabin that might have been made of some of the bits that made his up.

Also, the building is very nice. Tell them that too.

If this doesn’t float your boat, then you can drive straight on to Chicago, and if you get your timings right, then you can enjoy this beautiful view of the Chicago Skyline as the sun goes down:

I will warn you that you may have to go through parts of Kentucky where every part of the gas station has a bar on it. Including the windows within the station where you pay. You may also have to put your money in a box that they put through a door that they unlock electronically so that there is no way you can touch them.

But it will be worth it.